Palestinian Authority leader Mahmoud Abbas again missed no opportunity to miss an opportunity on Friday in a 47-minute harangue that he delivered as his speech at the United Nations General Assembly. (Speakers were asked to keep their remarks to 15 minutes.)


Israel’s Ambassador to the UN, Gilad Erdan, flatly called the remarks “a lie-filled rant completely detached from reality” that he said “further proved his absolute irrelevance.”

Noting that Abbas had once again used the UN as a platform to incite hatred against Israel while glorifying the terrorists his government funds, Erdan pointed out that the United States and members of the UN Security Council are “well aware that the Palestinians rejected every peace plan ever presented, that they fund terrorists, and that the Palestinian Authority doesn’t even have sovereignty over their own territories, which are controlled by terror groups.”

The American Jewish Committee commented in response to Abbas’ rant, “Just a day after Israeli Prime Minister Yair Lapid told the United Nations he supports a two-state solution, it was regrettable that [Abbas] reacted to this courageous overture with hostile rhetoric that prevents a meaningful dialogue.”

Abbas could have used his own address…”to express his willingness to end decades of conflict with a negotiated solution that involves give and take on both sides. He did not,” the AJC pointed out.

“There is only one way to ensure two states for two people, and that is by coming to the table and negotiating an accord that guarantees the safety of the Israeli and Palestinian people and leads to a prosperous and peaceful future.”

Abbas began his remarks by ranting about the nakba — a reference to the establishment of the State of Israel, referred to in Arabic as nakba, a “catastrophe.”

Claiming he was addressing the global body “on behalf of more than 14 million Palestinians whose fathers and ancestors have lived the tragic nakba 74 years ago,” Abbas said “they are still living the spillovers of this nakba which is a humiliation for the whole humanity, especially for those who have conspired, planned, and executed this heinous crime.”

The 87-year-old PA leader went on to say the Palestinian Authority’s “trust and the possibility of achieving a peace based on justice and international law is unfortunately regressing because of the Israeli occupation policies…Israel, which is ignoring the resolutions of the international legitimacy, has decided not to be our partner in the peace process.”

Abbas urged the General Assembly to back his attempt to persuade the UN to grant full member status to the Palestine Liberation Organization (PLO), which represents the Palestinian Authority — a move he was explicitly warned by the Biden Administration not to try, since the US will use its veto in the UN Security Council to counter the effort. 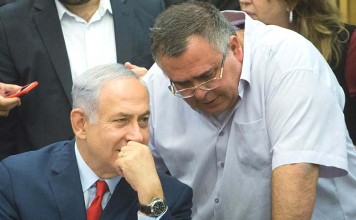