The U.S. “Deal of the Century” peace plan, which is about to be released, is built on the premise that the Palestinian Authority accepts Israel’s existence, albeit not in the current borders. However, this is a false premise. The PA tells its own people, including its children and Israeli Arab children, that all of Israel is “occupied Palestine” and that Israel’s existence should not be recognized in any borders.


Not sufficing with disseminating these messages to its own children, the PATV children’s program The Best Home is also trying to alienate Israeli Arab children from their own country Israel. Clips from the program have been downloaded and translated by the Palestinian Media Watch (PMW) media watchdog.

The official PATV host introduced an Israeli Arab boy who lives near Haifa as a resident of “occupied Palestinian lands,” and cheered “Bravo” when the Israeli Arab boy said “there is no such thing as Israel” and that he was actively encouraging other Israeli Arab children to see Israel as “Palestinian.”

Official PATV host: “Faisal lives in the occupied Palestinian lands in the Tamra area (i.e., in Israel, near Haifa)… On the school radio he broadcasts Palestinian songs and tries to spread the consciousness within him and his love for Palestine, to all the surrounding cities and villages. This is very nice, particularly when they [Israelis] are trying to keep that area Israeli, but the Palestinians there need to emphasize to everyone that this area is Palestinian…”

Although the statements clearly contradict the PA statements to the international community, they are not unexpected, since denying Israel’s right to exist is a basic tenet of the PA.

In 2017, the current PA Prime Minister Muhammad Shtayyeh (who was then Commissioner of Treasury and Economy and Fatah Central Committee member), made clear that PA Chairman Mahmoud Abbas’ Fatah party, that has ruled the PA since its creation, still refuses to recognize Israel.

“The Fatah Movement never demanded that Hamas recognize Israel. To this moment, Fatah does not recognize Israel. The topic of recognition of Israel has not been raised in any of Fatah’s conferences.”
[Official PATV, Topic of the Day, March 26, 2017]

Whereas the PA tells the international community that it sees the territories Israel acquired in 1967 as “occupied,” on multiple occasions Abbas has denied the legitimacy of Israel’s existence in any borders, declaring that the Palestinians have been living under occupation since Israel’s creation.

Speaking at the UN Human Rights Council in Geneva in 2015, Abbas said, “Mr. President, ladies and gentlemen, don’t you ask yourselves: Until when will the Israeli occupation of our land continue? After 67 years (i.e., since Israel’s establishment in 1948), until when? Do you think it can continue, and that it benefits the Palestinian people?” [Official PATV, Oct. 28, 2015]

In 2016 he repeated the claim. “I do not deny that countless obstacles and difficulties stand before us, but all of these are no match against our will. We have been under occupation for 67 or 68 years (i.e., since Israel’s establishment in 1948). Others would have sunk into despair and frustration. However, we are determined to reach our goal.” [Official PATV, March 11, 2016]

The fundamental nature of the PA rejection of Israel’s existence in any borders was recently reiterated when PA Minister of Culture Atef Abu Saif was quoted by German media saying “he would accept Jaffa remaining Israeli.”

Immediately after the publication of the German report, Abu Saif hurried to deny the claim and emphasized that “nothing at all was said in the interview that relates in any way to relinquishing Jaffa, because no one has the right to do that.” [WAFA, official PA news agency, May 11, 2019]

It should be stressed that Jaffa is part of Tel Aviv, and part of the State of Israel since 1948. These expressions are confirmed by many other daily PA expressions and activities by the PA leadership denying Israel’s right to exist. For example, outgoing PA Education Minister Sabri Saidam presenting a child poet with plaque containing a map of “Palestine,” which includes all of Israel.

Hundreds of maps such as these appear in the current PA school books and are presented by the PA regularly in the daily life of Palestinian Authority Arabs.

Official PA TV recently taught children that “All of Palestine will return to us,” while pointing to a map of “Palestine” that includes all of Israel.

Having indoctrinated generation after generation of Palestinians to reject Israel’s existence, it is no wonder that the PA leadership is unable to accept any offer of peace. The message they have been giving their people for years is that nothing other than the termination of Israel, will suffice.

For all these reasons, today May 15, the anniversary of the creation of the state of Israel remains one of the most important days on the Palestinian calendar, as the day they mourn the “Nakba” – the “catastrophe” of Israel’s creation and existence. 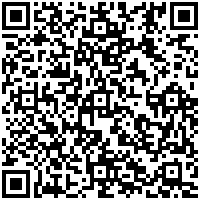