Israeli Security forces shot dead a terrorist overnight Monday during an arrest raid in the area of Ras al-Ain in Shechem. IDF and Border Police forces arrested the wanted man at home with a homemade Carlo assault rifle. After they left the place with their prisoner, PA Arabs threw explosive charges at them from a short distance. The forces returned fire and hit one of the attackers who was rushed to hospital by a Red Crescent ambulance and later died of his wounds.


According to WAFA, the dead terrorists is in the exchange of fire was Jameel al-Kayyal, 31. WAFA also reported that two Arabs were injured during the operation after being rammed by the force’s vehicles.

There were no casualties to the Israeli force.

According to PA Arab media reports, Israeli security forces arrested 26 Arabs throughout Judea and Samaria, and eastern Jerusalem. Some of the detainees are released prisoners, including Sheikh Hassan Yussef, 64, who is considered one of the senior Hamas terrorists in Judea and Samaria. Israeli security officials also visited Hussein Abu Kuwaik, a senior member of Hamas in Ramallah, and warned him not to continue promoting Hamas activities.

There were also several clashes Sunday and overnight Monday between young Arabs and the PA security forces who tried to prevent the hoisting of Hamas flags during receptions for prisoners who had been released from Israeli prisons. In Bethlehem, an explosive charge was thrown at the PA forces and a policeman was moderately wounded.

In Tulkarm, there were clashes with PA security forces after they had raided a reception for a released Hamas prisoner and confiscated the terror organization’s flags. The forces fired tear gas canisters to disperse the rioters who had set fire to tires. 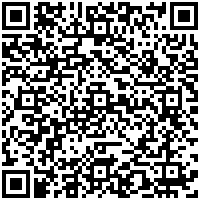