The news agency announced Monday (September 17) that the 17-year-old terrorist who attacked and killed the well-known pro-Israel advocate was “stabbed and killed” by Khalil Yousef Jabarin “on the road between Bethlehem and Hebron.”

Moreover, the government news service apparently was embarrassed to acknowledge the fact that the victim himself chased down his attacker after the vicious stabbing — and even jumped a wall in pursuit — and fired three shots at the terrorist before collapsing on the ground. All three shots found their mark, as did those of the shopping center security guard and an a civilian who was in the area as well.

No. The official Palestinian Authority government news agency told its citizens that the teen terrorist was “arrested after he was shot and injured by Israeli soldiers in the area.”

Perhaps now it can be understood where the “different narrative” begins, and why Palestinian Authority Arabs, their supporters in the region and worldwide have such a distorted view of reality. 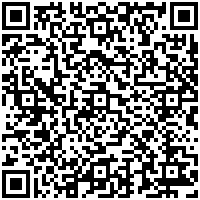