Anonymous vandals on Thursday defaced a street mural in the Greek city of Thessaloniki, on Michael Kalou Street, depicting the extermination of the city’s Jews during the Nazi occupation. The anti-Semitic act took place on the week Thessaloniki, a.k.a. Salonika, commemorated the 78th anniversary of the departure in 1943 of the first train that hauled the city’s Jews to the Auschwitz death camp.


The mural was created only a few days ago to commemorate the dark anniversary, by the Vardaris Neighborhood Team of the Self-Help Promotion Program of the Aristotle University of Salonika under the direction of the UrbanAct art collective.

Located on the Thermaic Gulf, at the northwest corner of the Aegean Sea, Salonika is the capital of Macedonia and the second-largest city in Greece, with more than 1 million residents. Salonika’s 54,000 Jews were shipped to the Nazi extermination camps, where more than 90% of the Jewish population of the city were murdered. Only the Jews of Poland experienced a greater proportion of ruin.

According to Rena Molho, a Greek historian who focuses on the Jews of Salonika, in order to carry out the deportations, the Nazi authorities dispatched two specialists in the field, Alois Brunner and Dieter Wisliceny, who arrived on February 6, 1943, and immediately applied the Nuremberg laws in all their rigor, imposing the display of the yellow badge and drastically restricting the Jews’ freedom of movement.

Toward the end of February 1943, the Jews were rounded up in three ghettos, from which they were transferred to a transit camp known as the Baron Hirsch ghetto, which was adjacent to a train station. There, the death trains were waiting. To accomplish their mission, the SS established a Jewish police force led by Vital Hasson, which was notorious for its abuses against the local Jews.

The first convoy departed on March 15, 1943. Each train carried upwards of 4,000 Jews, mainly to Auschwitz. A convoy also left for Treblinka, and there may have also been deportation to Sobibor since Salonikan Jews were liberated from Sobibor. The Jewish population of Salonika was so large that the deportation took several months to complete, on August 7, 1943, with the deportation of Chief Rabbi Tzvi Koretz and other notables to the Bergen-Belsen concentration camp. In the same convoy were 367 Jews protected by their Spanish nationality, who had a unique destiny: they were transferred from Bergen-Belsen to Barcelona, and later to Morocco, with some eventually reaching the British Mandate of Palestine.

On Thursday, Greece’s foreign ministry condemned the vandalism in Salonika, stating: “We express abhorrence for any acts that insult the memory of victims of Nazi atrocities. We emphasize, yet again, the importance of disparaging racism, hatred and fanaticism, and the need to defend our ethical values.”

The Jewish community of Salonika also condemned the vandalism of the mural: “It is unfortunate that only a few days after its completion, strangers, who seem to be bothered by the willingness of the city to remember even the darkest pages of its history, vandalized a work that received flattering comments, both for its aesthetics and for the powerful message that it conveys on the need to preserve the memory and to constantly remind the events of the Holocaust.”

“Racism and anti-Semitism remain a serious problem and an open wound for our society,” The Jewish community’s statement continued. “It is obvious that we must always remain vigilant to fight—through the use of historical facts and education—any attempt to revive the ideologies that gave birth to the Holocaust, the nadir of humanity.”

The Vardaris Neighborhood Team announced that they have already started restoring the mural, saying, “Acts like this do not honor our city’s culture and history, and are characteristic of the ignorance, lack of education, and racism of some of our fellow citizens.”

This report is based on reports in the Greek Reporter, and Greek City Times. 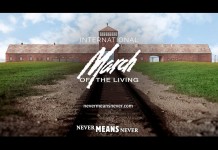 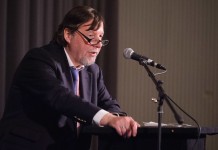 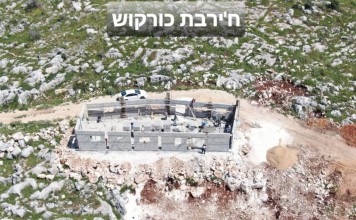