Two London charedim from Golders Green were among the first Jews to die after contracting the new coronavirus in the UK.

Hungarian-born Holocaust survivor Willi Stern, who was a major supporter of charedi charities, died at age 85, as did Rina Feldman, at age 97.

The head of Leeds Beth Din, Dayan Yehuda Yaakov Refson, also passed away on Sunday at age 73; the cause of death is unclear. The British-born dayan was educated at a Lubavitch yeshiva in France before continuing his studies in New York, after which he went on shlichut to Glasgow, Scotland. He moved to Leeds in 1976.

Last week, Chief Rabbi Ephraim Mirvis ordered all synagogues under his jurisdiction to close until further notice because of the coronavirus outbreak. He said, “The dayanim and I will be will now be praying all weekday, Shabbat, and Yom Tov services by ourselves at home.”

The Union of Orthodox Hebrew Congregations this week ordered all shuls and educational institutions to close. Last week it ruled that healthy men could continue to attend shuls, but not women and children.

Following widespread criticism of the Union for not closing minyanim, Rabbi Avrohom Pinter of the UOHC told The Jewish Press on Monday, “All our shuls are working within the government’s guidance. Then worshippers are keeping distance from each other. They are staggering minyanim.

“But doctors do not believe that people are safe, just keeping distance. If distance is not safe, then the government has to clearly say so.”

The Federation of Synagogues has also ordered shul closures.

North Manchester Jewish Cemeteries Trust announced that all future funerals would take place outside the ohelim and at the gravesides. Only immediate family members, including a minyan of men should attend.

All unveilings should be postponed.

Manchester Beth Din announced that it has taken extra steps to ensure that their women’s mikva’s chlorination level had been increased sufficiently to inactivate the virus.

Last Thursday, London’s Borehamwood Synagogue teenager Naftali Arden livestreamed his bar mitzvah online from his home and that of his rabbi Alex Chapper.

Massive panic buying in kosher shops is making the coronavirus situation worse, especially for those self-isolating and unable to shop and those wishing to begin Pesach preparations.

Rev Yigal Wachmann, who lives opposite one of Manchester’s largest kosher shops, Haber’s World told The Jewish Press, “The minute Pesach stocks came in last week, there was mass buying and the shelves were bare within an hour of opening. This week they are only allowing two people in at a time and giving all customers gloves.”

The government, meanwhile, has amended legislation, that would have enabled local authorities to compel cremations, rather than burials, after protests from the Board of Deputies and Muslims.

All schools were closed from Friday, except for vulnerable pupils and the children of key workers. 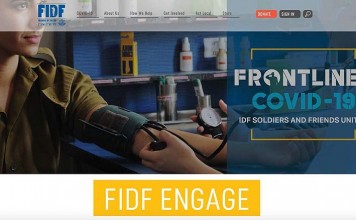