Some 100,000 babies and children in Israel are still vulnerable to the polio virus, because they either are not fully vaccinated or are not vaccinated at all against the disease, KAN News reported Tuesday.

The news comes after a new strain of poliovirus was discovered in Israel earlier this year. That mutated strain was resistant to the oral polio vaccine (OPV) but can be prevented with the inactivated polio vaccine (IPV).

In Israel as in the United States, children receive the inactivated polio vaccine, which is administered to infants in a series of four injections at ages two, four, six and twelve months and is 99-100 percent effective at preventing the illness and its complications.

The disease attacks the central nervous system and can sometimes paralyze a victim within hours. It spreads from contact with body fluids and through contaminated water.

Those who are inadequately vaccinated – or not vaccinated at all — include 20,000 babies between the ages of six weeks and 11 months – 20 percent of the total vulnerable population, plus 68,000 young children ages one to six and 40,000 older children ages seven to 20, according to the report.

However, that effort has since been put on hold after public health nurses learned there would be no increase in their salaries for the extra work involved.

The dispute between the health and finance ministries and the nurse’s union has thus frozen an initiative designed to prevent Israeli children from coming down with one of the most dangerous diseases to threaten the country.

Paralytic Polio Struck in March
Israeli authorities began urging vaccination against polio since this past March, when the first case in 34 years was detected in an unvaccinated four-year-old child who was hospitalized in Jerusalem’s Hadassah Medical Center. After the virus damaged the child’s muscles, he was transferred to a specialist hospital to treat the disease.

Several other Israeli children also tested positive for polio this year but were asymptomatic.

Traces of the virus have also been found in wastewater samples in the country.

The case was a major wakeup call to medical professionals across the state because it signaled the existence of “hundreds, if not thousands of others that are undetected,” Dr. Eli Rosenberg, deputy director of the New York State Office of Science of Public Health, told JewishPress.com last month.

New York State declared a polio state of emergency this past September in response to the discovery of the Rockland County case.

The executive order signed by Governor Kathy Hochul expanded the list of those authorized to administer the vaccine to include EMS workers, pharmacists, and midwives. It also authorizes physicians and certified nurse practitioners to issue non-patient specific standing orders for the vaccine. 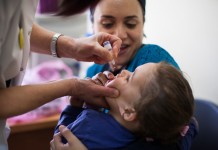 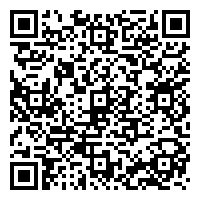