Israeli HMOs (kupat holim clinics) this week are to begin mass testing of the population to determine whether they have antibodies from COVID-19, the disease caused by the novel coronavirus. The antibodies indicate a person may have developed an immunity to the virus.

According to a report by Ynet, the test, which is voluntary, to be performed as a blood test and results are expected within the hour.


The Health Ministry said if it proves to be effective, those first to be tested will be the at-risk populations such as the elderly, people with underlying health conditions and medical staff.

Mass Testing with Saliva on the Horizon
A separate project to test the entire population is being contemplated by health officials involving saliva samples collected from every Israeli citizen in the country.

The test will be carried out using a method known as “pooling” that enables the simultaneous testing of dozens of samples, using existing available resources.

This method can dramatically increase the current COVID-19 testing capacity while allowing medical personnel to greatly accelerate the rate of testing and detection of infected patients in the population.

A trial of the pooling method was conducted jointly by researchers from Technion – Israel Institute of Technology in Haifa, and the Rambam Health Care Campus (also in Haifa) with the support of the Ministry of Health.

Using the “pooling” method, one can perform molecular testing on a “combined sample taken from 32 or 64 patients. If all prove negative, then it is clear that all of those patients have not had the virus, and one moves on to the next group.

If there is a positive response in a group, then one must narrow it down further until reaching the individual positive sample. This method can test a large number of people in a very short period of time, with limited resources.

Once narrowed down, the clinic can contact the patient whose positive sample indicates he or she may have had the virus, and a blood test can be performed to further clarify the status.

“Today, we receive approximately 200 COVID-19 test samples a day, and each sample undergoes individual examination,” said Dr. Yuval Gefen, head of the Rambam Clinical Microbiology Laboratory. “According to the new pooling approach we have currently tested, molecular testing can be performed on a ‘combined sample,’ taken from 32 or 64 patients.

“This way we can significantly accelerate the testing rate. Only in those rare cases where the joint sample is found to be positive will we conduct an individual test for each of the specific samples.”

Home Test Also Being Developed
A separate research team is also engaged in developing a home test that can rapidly diagnose the novel coronavirus, officially known as the SARS-CoV-2 virus. It is a simple test that produces results in less than a hour, according to Professor Naama Geva-Zatorsky from the Ruth and Bruce Rappaport Faculty of Medicine at Technion, who together with her research team has developed the test.

Further development can lead to using this method as mass testing kit in the workplace, points of care, and households. “We developed a protocol for a test that requires only a saliva sample, reagents, and a thermal cup,” Geva-Zatorsky said.

The new test’s reliability was measured using 200 biological samples from confirmed coronavirus patients and patients suspected of infection with the virus. The samples were supplied by the coronavirus biobank at Rambam Health Care Campus.

“One only needs to immerse the saliva sample in a test tube that contains the reactive material and then in the thermal cup with hot water. If the color of the reaction changes, that indicates the presence of the coronavirus. The result is obtained within an hour and does not require lab analysis.”

However, she underscored, “This test is not designed to replace the current conventional method.”

The team is now completing the experiments in order to improve sensitivity to the presence of the virus, even in low concentrations.

The researchers found that when tested on standard swabs, in medium and high concentrations of the virus, the test identifies 99 percent of the cases, but in low concentrations a second test is necessary a few days later.

“Once we receive the Health Ministry approval, the kit can be widely distributed. We see this test as suitable for use at entrances to hospitals, workplaces, nursing homes, airports, and in drive-through facilities.”

“The new test will primarily increase the scale of testing in the community, and will enable the population to be surveyed faster and on a much wider scale,” Prof. Michal Chowers added. “The most significant innovation is that the test can be carried out on site, within an hour, eliminating the need to send the saliva to a special lab.” 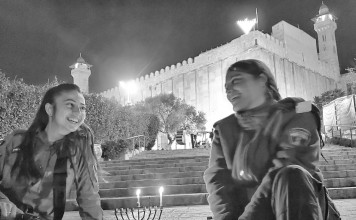