An ancient amulet made of lead and written in ancient Hebrew was found among the remains of the excavation carried out at the archeological site on Mount Ebal in Samaria, where the biblical-era altar of Joshua bin Nun is located.

The amulet is inscribed with the letter Alef and a mark reminiscent of a lotus flower.

The Book of Joshua describes how the Israelite General who commanded the conquest of Canaan, built an altar on Mount Ebal, acting on instructions from Moses after the Israelites had crossed the Jordan River.

Haifa University archaeologist Adam Zertal, who passed away in 2015, identified the remains of an altar found at the site as the one described in the Bible, where Joshua distributed the land among the tribes.

Zertal’s research showed the area to be a unique ritual site for offering sacrifices. The dating of the altar to the period of the Israelites’ entry into the land, the similarity between the excavated structure and the altar described in the Bible, and the fact that only kosher animal bones were found at the site, led the researchers to conclude that this is the altar Joshua built on Mount Ebal.

Researcher Zvi Konigsberg, who assisted Zertal in the excavations between 1982 and 1988, described how “after the excavation, we left many piles of dirt we had dug up, and given that the piles may contain valuable finds, a group of Prof. Zertal’s friends moved them to a safe place where they could be inspected. Many years later, the technology for properly sifting the dirt was developed.”

One of the items discovered was the tiny amulet, measuring only 2×2 centimeters. The amulet is “opaque as an oyster,” implying that it used to contain something inside. The lead expert at the Israel Antiquities Authority tried to open it but gave up after it began to crumble at the edges. The researchers then found a lab in Prague that performs sophisticated photographs that allow for the construction of a three-dimensional model. The results showed many grooves in the amulet, one of them resembling a bull’s head, known in ancient times as an “Alef,” the first letter in the Hebrew alphabet.

“Another mark found on the amulet resembles a lotus flower, a significant image in ancient Egypt,” according to Konigsberg.

Konigsberg revealed that a thorough examination of the plasterboards discovered inside the altar will be carried out in the coming days. He explained that during Joshua’s conquest, plaster was used only in places of worship. “It would be fascinating to examine the boards with technologies that were not yet available to us at the time of the excavations, such as sophisticated infrared devices, which may reveal writing, which is mentioned in the Bible regarding Joshua’s altar,” Konigsberg said.

Joshua’s altar is the only currently known remnant from the period of the Israelite conquest of Canaan. Prof. Zertal believed that this was the altar around which the covenant ceremony mentioned in the Book of Joshua took place.

Yossi Dagan, head of the Samaria Regional Council, said that the new find “proves again the deep and inseparable connection between the Jewish people and Samaria and the Land of Israel in general.”

In 2010, Prof. Zertal headed the excavations at El-Ahwat, which he identified as the Biblical Harosheth Haggoyim, a fortress described in the Book of Judges as the cavalry base of General Sisera, the commander of King Yavin’s army (Judges 4).

“The discovery of Joshua’s altar by the late archaeologist Prof. Adam Zertal is one of the most significant discoveries in the history of archeology in the Land of Israel,” Dagan asserted, noting that “unfortunately, the Palestinian Authority, together with partners from Europe and the extreme left, is trying to erase the history of the Jewish people in Samaria every day. Only recently there was another damage inflicted on the site of Joshua’s Altar. The government must take full responsibility for these historic and important sites in Samaria, preserve and develop them,” Dagan said. 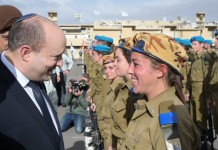