Once again, anti-Semites are working to attack Jews and Israel — this time with the definition of apartheid in the Merriam-Webster online dictionary, no less.

The word “apartheid” – translated as “apartness” in the language of Afrikaans – is defined as a system of legislation that upheld segregationist policies against non-white citizens of South Africa, according to the History.com website.


In Britannica.com – an encyclopedia website – the word is defined as a policy that governed relations between South Africa’s white minority and nonwhite majority and sanctioned racial segregation and political and economic discrimination against nonwhites.

But not in the classic online dictionary used by students the world over.

The Merriam-Webster dictionary – often the “final word” when trying to define or explain a word to someone – calls it a “racial segregation” and/or “separation or segregation” and references South Africa.

However, Merriam-Webster then goes on to provide examples of apartheid in a sentence, using “recent examples on the web.”

The first example is one that is viciously, overtly antisemitic, extracted from an August 7, 2020 newspaper article by Mary Christine Bader in the Star Tribune entitled, “Admit it: The two-state solution for Palestine is dead.” Without even entering the political issue of “Palestine” itself, here’s the excerpt:

“As Israel prepares to formally annex the most fertile, most water-rich third of the Palestinian West Bank, will America continue to enable Israeli apartheid on the Hundred Years’ War on Palestine?”

The assumption of that sentence that any of the territory discussed above was part of an imaginary state of Palestine, or that it was the national territory of an Arab ethnic identity that didn’t exist 100 years ago, and which for the 19 years between 1948 and 1967 were actually illegally occupied by Jordan, and prior to that was occupied by the British Empire, and before that was part of the Ottoman Empire, is simply false.

Not once have the Arab residents of that area (many of whom immigrated to the region as the Jews returned) ever been citizens of an imaginary Palestinian state, or anything other than citizens or residents of those who fought a war and won the right to govern there for a time, after Jews left and before our return.

While we’re on the subject of land, there is plenty of wonderfully “fertile, water-rich land” left in the other two-thirds of Area C, which the United States has proposed for the desired Palestinian State under the Trump Middle East Peace Plan. Anyone who has seen the rocky, arid areas with which Israel was forced to work before they became “fertile” and “water-rich” knows perfectly well just how they got to be that way – which is why the Palestinian Authority wants them so badly now.

Furthermore, as for the “Hundred Years’ War on Palestine” by the way? (1) The name “Palestine” is a Roman designation and was resurrected by the United Kingdom. (2) As for the so-called 100-years’ war, perhaps it is best to scroll back to the Arabs’ penchant for conflict if one is seeking a century of war in this region.

And finally, as for “apartheid” please refer to the Palestinian Authority, which promises to maintain its territory completely Judenrein if ever given the opportunity to form a Palestinian state.

In fact, it is currently illegal in the Palestinian Authority to sell land to Jews. That’s a perfect example of apartheid in Palestine.

In contrast, in areas where Jews are in control, there are Jews, Arabs, Druze, Bedouin, Christians and everyone else shopping together, going to supermarkets, medical clinics, malls and toy stores together, in hospitals together and working together – in short, living together in the State of Israel and in the territories as well.

Sorry, folks. Deliberate in its hate though the Merriam-Webster entry must have been, the definition is completely inaccurate.

Life in Israel is not characterized by apartheid. In the Palestinian Authority, on the other hand…

Action Item for our readers:
Contact Merriam-Webster and demand they remove their false entry.

Update: The factually incorrect and anti-semitic example has been removed from the online dictionary. 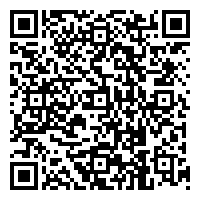