On Monday around 7:00 PM, Netanya United Hatzalah volunteer EMT Haim Gil David and his family were heading out to the graduation of Haim’s son’s eighth-grade graduation ceremony when his communication device alerted him to a nearby medical emergency. With a supportive nod from his wife, Haim Gil jumped on his ambucycle and headed to the given address.

At approximately the same distance from the emergency, from the other direction, volunteer EMT Yonatan Auoat was driving his ambucycle en route to the same address. Yonatan had just arrived home from work. He had already parked his ambucycle, and now jumped back on it and raced to the scene of the emergency. Haim Gil and Yonatan arrived at the same time, both in under a minute and a half.


The neighbors gave them the code for the residence’s gate, and the two EMTs entered. Haim Gil grabbed a rug and used it to prop the door open for the ambulance team who would be arriving any minute. The two EMTs then headed up to the house and found an unconscious 72-year-old man lying on the ground with his daughter attempting CPR.

Haim Gil and Yonatan took over the chest compressions as the daughter explained that her father was suffering an airway obstruction and had been sick with lung cancer for a few years. Haim Gil attached his defibrillator but it did not advise a shock. The two EMTs continued with CPR, switching off rounds of chest compressions and assisted ventilation. After seven minutes of strenuous CPR efforts, an ambulance crew arrived at the scene and joined the attempts to revive the pulseless man.

As the ambulance team assisted Haim Gil and Yonatan in chest compressions, Haim Gil noticed the man had flinched. When he checked for a pulse, Haim Gil found the man’s pulse was back and paused the CPR. The team continued with assisted ventilation until the man’s condition stabilized just as a mobile intensive care ambulance arrived at the scene.

After making sure the patient was secure and on his way to the nearest hospital, Haim Gil told Yonatan that he was late for his own son’s graduation party, and Yonatan told him to leave immediately, and so he did, arriving only a half an hour late at the event.

“I have been volunteering for more than 10 years now, and my family is very used to my picking up and running out to respond to emergencies,” said Haim Gil. “When I ride my ambucycle, I keep thinking what a gift it is. My ability to respond to medical emergencies so quickly has saved many lives. On top of that, just as I was able to reach the emergency quickly, I was also able to rush over to my own son’s graduation quickly, and only miss the beginning. I was glad to be able to help the man today, and I was also glad to be there for my son in his proud moment.” 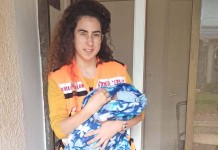 New EMT: I Was Suddenly Delivering a Baby for the First Time on the Side of the Highway 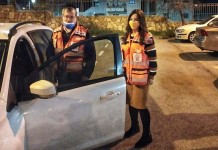