(UN HEADQUARTERS, NYC) It was without a doubt the main attraction on Tuesday, opening day of the General Debate – the annual event where hundreds of dignitaries and Heads-of-State convene at the UN General Assembly to discuss global issues. Even the most blasé New Yorkers, normally unimpressed by the pesky motorcades, barricades, Swat Teams, Secret Service, and rooftop snipers that clog their city each September, tuned in to hear what US President Donald Trump had to say.

After a somewhat rocky start, when he unintentionally elicited laughter from his overwhelmingly foreign audience while listing American achievements, Trump found his rhythm, thanking the Gulf nations for assuming greater responsibility in the fight against terrorism and extremism, and thanking Korean leader Kim Jong-un for his courage in taking steps towards denuclearization.  From there the President segued into the main event his audience had been waiting for, accusing Iran of sowing death and destruction,

“We cannot allow the world’s leading sponsor of terrorism to possess the planet’s most dangerous weapons,” said Trump, upholding his decision to pull the United States out of the Joint Comprehensive Plan of Action and to reimpose nuclear sanctions on Iran and emphasizing that a country pledged to the destruction of the state of Israel must not be allowed to have nuclear weapons.

The President discussed Global Trade and Humanitarian crises before recalling the relocation of the United States Embassy in Israel from Tel Aviv to Jerusalem. “America’s policy of principled realism means we will not be held hostage to old dogmas, discredited ideologies and so-called experts who have been proven wrong over the years, time and time again,” he said, maintaining that between Israelis and Palestinians has been advanced, not harmed, by acknowledging the obvious facts.

Later in the day, Israel’s Ambassador to the UN Danny Danon sat down with The Jewish Press to share some thoughts. “I’m impressed with President’s Trump’s speech,” said Danon, “and very proud of his strong support of Israel”

“The fact that he named Iran as a major threat to Israel, and said he’ll do whatever he can to protect Israel, was very meaningful to us,” continued Danon, “We Israelis have spoken about it many times but when the American President speaks about it people listen.”

He added that it’s natural for Americans and Israeli’s to stand together. “We have a lot in common, I see it every day when I walk the halls with Ambassador Haley. We share the same lives, the same challenges, even the same enemies. Just last week Iranian officials were making ridiculous accusations against the United states and Israel.”

“It required bravery for Trump to mention Embassy move,” Danon stated, “Israel has a true friend in the White House. And we’re very grateful for that.”

Not surprisingly, the Ambassador’s response to Iranian President Hassan Rouhani’s speech later in the day was less kind. In his speech Rouhani, President of the Islamic Republic of Iran since succeeding Mahmoud Ahmadinejad in 2013, pledged to fight terrorism and Arctic warming, and assigned blame for most, if not all, of global suffering to the United States and Israel.

“Rouhani is financing global terrorism, and is trying to preach about morality,” Danon said. He added that had it not been for Tehran’s financial support, Hamas could never have dug terror tunnels into Israel, and Hezbollah would not have been able to stockpile weapons.

The speeches by Trump and Rouhani only added to the tension already building in anticipation ahead of Wednesday’s Security Council meeting. Trump will preside over the 15-member council, since the United States happens to hold rotating presidency this month, and the meeting happens to coincide with the General Assembly and Debate, although it is not part of it.

And as rare as it is for a Head of State to preside over the meeting, today’s meeting will be even more has an even more extraordinary – almost surreal: Because so many Presidents, Prime Ministers, Crown Princes, Kings, and Queens are in town for the General Assembly, all but two of the Security Council member states (Russia and China) will be represented by Heads-of-State.

Moreover, the Presiding Country chooses the meeting topic. President Trump’s choice of Nuclear Non-Proliferation Agreement is expected to be directed, overtly or not, at Iran and its President.

When asked what he’d like to see come out of the today’s Security Council meeting, Danon said it’s all about the sanctions. Specifically, the more crippling ones expected to be rolled out in November. “Some of the European countries tried to bypass these sanctions. It will be interesting to see the interactions and hear what then European leaders will say if Trump says join us.”

Danon remains optimistic. He says he and his delegation will to work to expose the true face of Israel. “Projects like our reenactment ceremony in Queens museum, the delegations of ambassadors we take to Israel, our Tashlich ceremony, they help us forge new relations with more countries.”

He says many ambassadors he works with have formed quiet relations, and acknowledges that quiet relations are good, but believes that public ones would be better. “If we can bridge the gap between private and public will be great year for us.”

Danon’s latest initiative is a campaign to combat International Antisemitism, a photo pavilion set up at the entrance UN headquarters in New York. The pavilion opened Tuesday along with the General Assembly.

Everyone entering the UN, including all the world leaders and ambassadors arriving for the General Assembly, will have the opportunity will be photographed with the #No2Antisemitism campaign slogan. The goal is to publish the images on social networks, leading to the campaign against anti-Semitism with broad, international distribution.

I asked the young ladies running the booth if anyone’s turned them down yet for a photo and was told the answer is no.

So maybe the projects are working. 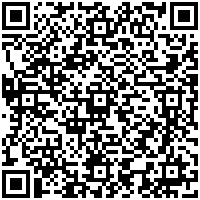