JERUSALEM, Israel, Sept. 5th–The Oslo peace process had “more failures than advantages,” French Ambassador to Israel Christophe Bigot told a delegation of pro-Land of Israel rabbis during a meeting at the French Embassy in Tel Aviv on Wednesday.

Bigot also joked that the embassy might be moved to Jerusalem, saying that while the space that housed the embassy had its drawbacks, it was only a  “temporary residence because” –switching to Hebrew– “Leshana Haba’ah Biyerusholayim” (next year in Jerusalem).

The statements are not typical of a representative of a European country which views advocates the creation of a Palestinian state or the “land for peace” formula behind the Oslo Accords and the so-called “peace process” which followed them.

France also believes, like the United States, that the status of Jerusalem should be determined in final status negotiations between Israel and the Palestinian Authority.

By the time this article was published, Bigot could not be reached for a response, but his comments were confirmed by two members of the delegation who met with Bigot and with whom the Jewish Press spoke separately.

The delegation visiting Bigot represented the Rabbinical Congress for Peace, a group which says it represents 350 leading Israeli rabbis who oppose ceding any kind of territory. They met with Bigot in order to urge France to oppose the creation of a Palestinian state and to ask that France stop European Union funding of anti-Israel groups which operate in Israel.

“These groups operate under the guise of peace and human rights but the money that the EU gives them is used for incitement against Israel, against co-existence and leads to bloodshed,” Rabbi Shlomo Rosenfeld, Rabbi of Shadmot said.

In response to Bigot’s comment about the Oslo process, Rabbi Joseph Gerlitzky, the organization’s Chairman told the Ambassador, “let’s be precise – it was failures without any advantages.”

Rabbi Gerlitzky is the Rabbi of Central Tel Aviv.

Rabbi Avrohom S. Lewin, the organization’s director, told Bigot that “the past 40 years have proven that the ‘land for peace’ formula is a failure and only leads to bloodshed and instability in the region.”

The delegation presented Bigot with a “p’sak din” – a juridical ruling in Jewish law – holding that it was forbidden to cede territory from Israeli control because it would endanger people’s lives.

The ruling has been signed by the 350 rabbis who are said to support the Rabbinical Congress for Peace.

Speaking over the phone with the Jewish Press, Rabbi Lewin said that the ruling was drafted in 1993, marking the beginning of the Rabbinical Congress for Peace.

“What’s unique about the ruling,” Rabbi Lewin said, “is that this ruling is not based on kedushat ha’aretz (the holiness of the land) but pikuach nefesh (saving lives).”

During the conversation Bigot also noted that while French citizens view Israelis as “occupiers who are against Palestinian aspirations” they should not be blamed as “that is exactly how Israelis portrayed in its own paper, Ha’aretz.”

Rabbi Lewin said he believed Bigot was implying that Ha’aretz’s left-wing reporting played a role in the distorted European view of the Israeli-Arab conflict.

While Bigot offered counter arguments on many issues raised by the delegation, he said he would convey their requests as well as the ruling to the French government. 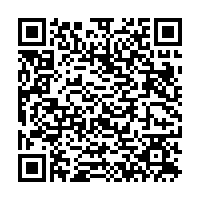