Decorated Roman sarcophagi (coffins) dated to the 4th century, considered among the most beautiful in Israel and the world, will soon receive the respect they deserve in the southern coastal city of Ashkelon.

These sarcophagi surpass in grandeur and quality all others of their kind found within the Land of Israel. They are made of light marble and decorated with reliefs all around. They were created in the major production centers in Greece or Asia Minor and were brought to Ashkelon by prior order.

A war scene is depicted in detail on the front and both sides of one of the sarcophagi. The researchers speculate that this is a depiction of the war between the Greeks and the Trojans. The top of another sarcophagus features a bas-relief from Greek mythology in which Hades, god of the underworld, abducts Persephone, daughter of Demeter, goddess of the earth and fertility.

The lid of this sarcophagus features a carving of a couple without identifying details, and the archaeologists believe that the final carving of the faces was intended to be done based on the features of future customers.

The Ashkelon Municipality and the Israel Antiquities Authority are upgrading the display of ancient Roman finds that have been stored for more than 50 years in the Sarcophagi Court at the Beit Ha’am compound in the Afridar neighborhood, and now they will be presented to the general public in a modern and inviting display.

In the 1970s, when the elegant sarcophagi were unexpectedly found during construction work in the Afridar neighborhood, they were placed at the center of an archaeological display that was already standing in the neighborhood. All the items put together created a tangible picture of the extensive urban activity that took place in the port city in ancient times. As you may know, Ashkelon was a vibrant trading city on an international scale, its name preceded it in the quality of the excellent products that went out to the ancient world. The source of its economic power and urban strength was the port and the sea routes leading to and from it.

The archaeological display of the IAA is being updated and upgraded with a new design, including new information signs, as part of the works currently being done at the Beit Ha’am complex. the heavy sarcophagi are being removed from the complex to undergo a preservation process by IAA experts, following which they will be returned to their permanent, improved location.

IAA Director-General Eli Eskosido said, “The Antiquities Authority sees the city of Ashkelon as spearheading the presentation of heritage values to the public. I believe that all the cities will one day learn from Ashkelon how to combine the new with the old and bring added value to the public space. These days, several significant projects are taking place throughout the city of Ashkelon, and its National Park offers access to the city’s magnificent heritage for the benefit of the general public.”

Ashkelon Mayor Tomer Glam said, “Today we are taking a huge step toward a revolution in preserving the historical sites in the city of Ashkelon. Alongside the preservation of the mosaic floor, the Efgad Wine City Well, the Sheikh’s tomb, and more, we are upgrading and preserving the sarcophagi courtyard in Beit Ha’am in the center of Afridar and giving the place the honor it deserves. This is how we combine Ashkelon’s rich past as an important port city and its promising future as a first-class tourist city. I would like to thank Deputy Mayor Mirei Altit for implementing our vision in this field and the IAA for its fruitful and successful cooperation.” 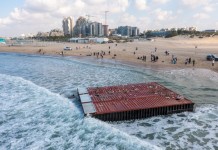