The Ministry of Religious Affairs and the Religious Council of Ashdod decided to pay for the burial of 14-year-old Yehuda Bilog who drowned last Wednesday off the coast of Ashdod and whose body was recovered on Friday.

Since Yehuda’s parents, Josephine and Chris Bilog, are Filipino citizens, Yehuda, who was born in Israel, does not have a certificate of residency (although his parents applied for one in 2010), and therefore Israel’s National Insurance (the equivalent of Social Security) is not required to participate in the burial costs, which, including a stone, could be as high as NIS 50,000 ($15,000).

Yehuda’s friends began a fundraising campaign to help the Bilogs pay for their son’s burial, but even before Shabbat, Rabbi Ovadia Dahan, chairman of the Ashdod Religious Council, ordered Yehuda’s immediate, cost free burial in the Ashdod cemetery in a civil ceremony.

Yehuda Bilog and three friends entered the water off the Ashdod Arches Beach Wednesday evening, and were quickly swept away by the currents. A man who had happened by was able to rescue Yehuda’s three friends on a surfboard he borrowed, but they could not locate Yehuda. The search for the boy continued until Friday at noon, when his body was discovered by two local surfers.

Yehuda lived in Rehovot and attended the De Shalit High School in that city. The city of Ashdod offered to bury him in recognition of the fact that he drowned on its shore. 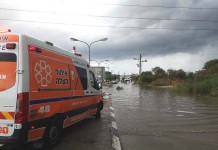