Prime Minister Benjamin Netanyahu and Crown Prince Salman bin Hamad Al Khalifa of Bahrain held their first public phone call on Tuesday, one week after the ceremony in Washington DC to sign a declaration of peace between their two nations.

Netanyahu was summoned from a meeting of the Coronavirus Cabinet to take the call, which involved a discussion about the possible ways in which the two countries might cooperate.


“We repeated the principles of the Abraham Accords and talked about how we are quickly adding content to the agreements between Bahrain and Israel and turning this peace [into] economic peace, technological peace, tourism peace, peace in every one of these areas, and you will hear about practical steps very soon,” Netanyahu said later in describing the content of the call.

Elsewhere around the world, Israeli diplomats have been meeting with their Bahraini counterparts as well, often speaking in the Arabic language.

US President Donald Trump brokered the two historic peace agreements signed last week between Israel and Bahrain, and Israel and the United Arab Emirates. On Tuesday during his pre-filmed video speech to the United Nations General Assembly, Trump called the agreements “the dawn of a new Middle East” and said by “taking a different approach, we have achieved different outcomes — far superior outcomes.

“We intend to deliver more peace agreements shortly and I have never been more optimistic for the future of the region. There is no blood in the sand. Those days are hopefully over.” 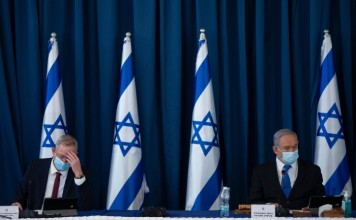 Strategic Ambiguity “Comes Out of the Closet”