The spokesperson for Russian President Vladimir Putin told reporters on Monday the president will be “informed” about appeals sent Friday by Israeli Prime Minister Benjamin Netanyahu and a second one sent Sunday President Reuven Rivlin, requesting the Russian leader extend his personal intervention in the case of Naama Issachar.

“We know that Mr. Netanyahu has sent such an appeal,” Putin’s press secretary Dmitry Peskov said Monday, according to the Tass news agency. “As soon as it is received via diplomatic channels, it will be referred to and considered by the Russian president.”

However he refrained from answering a question whether Putin and Netanyahu had ever looked into a possible exchange of Issachar for a Russian national. “I will leave it without comments. It is a subject of bilateral contact we never make public, unlike other countries,” Peskov explained.

Netanyahu’s office said he was keeping an eye on Issachar’s case and had discussed the matter with Putin during their meeting in Sochi on September 12, and over the phone on October 7.

The 25-year-old Israeli-American tourist was sentenced to 7.5 years in a “standard regime penal colony” on October 11 in the Khimki City Court in the Moscow Region after a conviction on charges of drug possession and smuggling.

Issachar was detained on April 9 of this year at Moscow’s Sheremetyevo Airport while in the airport transit zone before boarding a connecting flight to Tel Aviv after her arrival from New Delhi. A sniffing dog tracked her luggage and directed the airport security personnel to find 9.6 grams of cannabis.

During her court appearance Issachar admitted guilt in possession of cannabis but denied the smuggling charges.

The Israeli president likewise appealed to his Russian counterpart, sending a letter to the Kremlin prior to the start of the Jewish holiday of Sukkot in which he praised Putin’s “sensitivity to human life,” and his willingness to endanger the lives of your soldiers to locate and return the body of IDF soldier Zachary Baumel ז”ל. 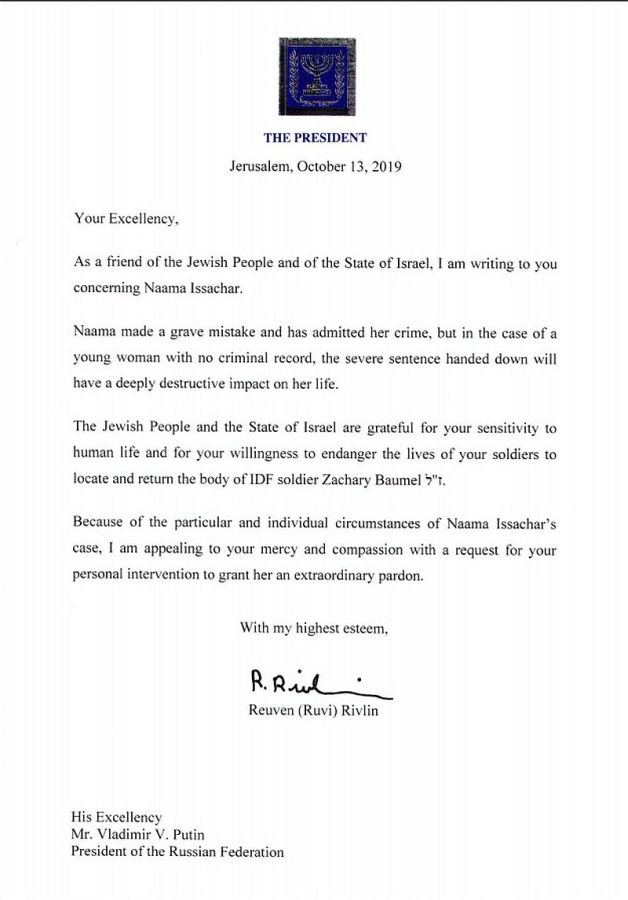