Israel approved a deal on Sunday with Cyprus, Greece and Italy for the EastMed pipeline to transport natural gas to Europe.


According to the report, the four countries are scheduled to reach a final decision by 2022 to have the €6 billion ($6.86 billion) pipeline built by 2025.

The report says that a land and sea survey is currently underway to determine the route of the 1,900-km (1,200-mile) pipeline. The European Union and IGI Poseidon, which owns the pipeline, each has invested €35 million ($40 million) in the planning stage. IGI Poseidon is a joint venture between Greek company DEPA and Italian energy group Edison.

Israeli Prime Minister Benjamin Netanyahu, Greek Prime Minister Kyriakos Mitsotakis and Cypriot President Nicos Anastasiades met at the end of December in Athens for their seventh trilateral summit, during which an agreement was signed for the EastMed pipeline. 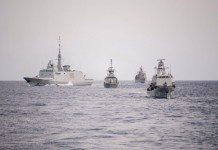