Reports claiming that Israeli Prime Minister Binyamin Netanyahu angered French President Francois Hollande by taking part in the Jan. 11 mass rally in Paris may have more to do with Israeli politics and media bias than with supposed strains in bilateral relations.

Israeli media outlets and commentators have been zealously and critically analyzing Netanyahu’s participation in the demonstration, which was planned after 17 people were killed in Islamist terror attacks on the offices of the Charlie Hebdo magazine and a kosher supermarket.


The criticism of Netanyahu’s conduct in Paris has been led by media outlets that do not hide their antipathy toward the prime minister and their desire to see him defeated in the March 17 election.

Netanyahu was reported to have ignored a request from Hollande that he not attend – mainly due to security concerns but also on the purported grounds that Hollande did not want the Israeli-Palestinian conflict to detract from the focus on solidarity with France.

Israeli media also charged that the prime minister had unceremoniously shoved his way to the front row, where he joined the leaders of France, Germany, Mali, the European Union, the Palestinian Authority, and others.

The left-wing daily Haaretz cited an unnamed Israeli source as saying France had privately asked Netanyahu not to attend; that Netanyahu had agreed but changed his mind after learning that two political rivals were planning to go; and that France had then retaliated by inviting PA Chairman Mahmoud Abbas to take part.

Haaretz also said that Hollande’s displeasure had been evident during a ceremony at the Grand Synagogue in Paris on Sunday night, when it said the president left while Netanyahu was at the podium.

(French media footage showed Hollande, wearing a skullcap, sitting alongside Netanyahu at the somber memorial service, during which the two were seen talking quietly together.)

By contrast, a review of French media reporting on the rally finds no French officials – named or otherwise – cited as confirming tensions between Hollande and Netanyahu.

What focus there was in French media on Netanyahu’s visit was mostly on his calls for French Jews to consider emigrating to Israel. Israeli leaders have for decades appealed to European Jews to “come home” to the Jewish state, especially after terror attacks targeting Jews or a rise in anti-Semitic incidents.

Le Figaro quoted French Prime Minister Manuel Valls as highlighting the strong symbolism of the presence of both Netanyahu and Abbas at the rally.

While French media have not corroborated the Israeli reports, some have noted them, with Le Monde observing that “much ink in Israel” had been expended on Netanyahu’s visit to Paris.

In an op-ed in the Israel Hayom daily, Haim Shine, a member of board of governors of the Jewish Agency, said the anti-Netanyahu media’s coverage of the Paris visit “shows the degree to which they resent Netanyahu and the Israel he represents.”

Writing on the Frontpage Magazine website, Freedom Center fellow Daniel Greenfield said the sources of the reporting were “a major reason to be skeptical of the claims” about the Hollande-Netanyahu spat, adding that “the lack of French reports confirming it are suspicious.”

While it’s entirely possible that Hollande really did not want Netanyahu to come, the sourcing on this story is from Haaretz,” he said. “Haaretz is a left-wing Israeli publication that will print absolutely anything negative about Netanyahu that it can.”

After the Charlie Hebdo attack, Haaretz published an op-ed in keeping with its editorial slant, headlined “Bibi’s Vulgarity: Using the Paris Shooting to Justify Israeli Colonialism.”

In it, Tel Aviv “writer and marketer” Roy Isacowitz depicted Netanyahu as a pompous and self-serving opportunist, who in response to the Paris attacks presumed to lecture France and the world “about how to deal with Islamist terror.”

Haaretz also reported that an opposition political group had created an online game mocking what the paper called Netanyahu’s “now-legendary footwork (and elbow-work) in insinuating himself into the front row of Sunday’s mammoth march in Paris.”

Players are invited to try to maneuver a little figurine of Netanyahu to the front row of a group of marching figures within a set amount of time. A message at the end reads, “We need a different leadership – one that will put Israel in the front row, even without pushing.”

Speaking in Paris the day after the anti-terrorism rally, Netanyahu alluded to the criticism at home.

“Insofar as it depends on me, I will always see to it that Israel marches in the first row of nations vis-a-vis its security and its future,” he said. 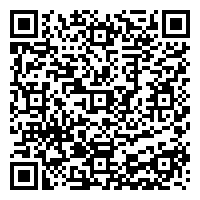