A female Arab terrorist attacked a Hassidic man on Sabbath afternoon as he walked past her in the street near the Damascus Gate entrance to the Old City of Jerusalem.

She failed to stab the Hassid who successfully dodged the attack, and she then stabbed another man instead (off camera), who was wearing a t-shirt with Hebrew writing on it.

The 29-year-old woman who attacked him holds a blue Israeli identity card and lives in the Jerusalem Arab neighborhood of Sur Baher.

The police brought the woman to the local precinct for questioning.

Other officers provided first aid to the victim until the arrival of medics from the Magen David Adom emergency medical response service. He was taken to Jerusalem’s Hadassah Medical Center.

Israeli Police subsequently went to the home of the stabber to search the house, confiscating a computer and some documents.

During initial questioning, the terrorist told police she came to the scene with the intention to attack a Jew. 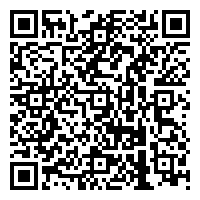