Thirty-five mothers of lone soldiers currently in Israel on a special trip with the Momentum organization thought they were attending an educational seminar at the new Nefesh B’Nefesh Campus in Jerusalem on Friday when they were surprised by their children serving in the Israel Defense Forces (IDF).

The mothers, many of whom hadn’t seen their sons or daughters since last year, arrived in Israel last Monday from all over the world, including the U.S., Canada, Argentina, Australia, Mexico, and South Africa. They came to Israel thanks to Momentum, a global movement that helps women deeply connect to their Jewish values and the State of Israel.


The mothers of lone soldiers arrived as part of a much larger delegation of 550 women who are taking part in Momentum’s flagship 8-day trip to Israel, which is done in partnership with the Ministry of Diaspora Affairs.

The emotional reunion of the mothers with their children in uniform was part of a joint effort between Momentum and the FIDF – Nefesh B’Nefesh Lone Soldiers program. Before meeting with their children, they met at the Nefesh B’Nefesh campus where they heard from Dr. Deborah Gilboa, a board-certified family physician and international parenting speaker (also a mother of a lone soldier) who spoke about the importance of resilience.

Momentum participant Kim Scop from South Africa was delighted to reunite with her son after not seeing him for four months. “This trip has been amazing. To have a group of people who have this unique thing in common, to be around other mothers who know how it feels and how hard it is to have a child serving in an army who is protecting a country that’s a world away from where you are is special; all of us understand that every day is a worry. I feel super inspired and grateful to be on this trip.”

“[My son] was one of the first soldiers who I saw come through the doors and he told me that was because the ones who entered the room first were selected based on mothers who cried the most this week. So that’s definitely me! I saw him and jumped off the stage to give him a big hug.”

“As a mother of a lone soldier myself, I know how much they long for the strength that can be found in a parent – especially in a mother – when they leave to defend a country that is so far away,” Momentum Founding Director Lori Palatnik, said. “Momentum is proud to support the critical goal of helping Jewish women all around the world connect with Israel and their roots. We are especially privileged to fulfill this dream of our participants, some of whom have been waiting so long to come to Israel because of the Covid-19 pandemic.”

The FIDF-Nefesh B’Nefesh Lone Soldiers Program cares for some 3500 Olim (immigrants) soldiers from around the world currently in active service. This program, with the full support of the IDF, offers guidance, support, and care for all lone soldier Olim during each stage of their service, after their release from the army, and during the adjustment stages to civilian life.

“It’s remarkable for us to have helped assist the emotional reunions of these incredibly devoted and supportive mothers of our lone soldier Olim, who have been required to serve in the IDF upon their Aliyah (immigration to Israel), at far distances from their families abroad,” said Rabbi Yehoshua Fass, Co-Founder and Executive Director of Nefesh B’Nefesh. “These mothers and soldiers demonstrate for us all how modern-day Zionism is flourishing, and we are grateful to them for the crucial role they play in defending the Jewish State.”

These mothers were provided with Momentum’s finely curated and jam-packed itinerary that helped them connect to Israel. Their schedule also featured highlights specifically catered to them so they could find strength and support in other Jewish women who understand the pain and pride associated with being a mother of a lone soldier. In addition to Friday’s uplifting event, they also met last Thursday with Israel’s First Lady Michal Herzog, who is a staunch supporter of lone soldiers at the President’s Residence.

“I would like to thank each of you from the bottom of my heart,” Herzog said. “It should not be taken for granted that your children chose to serve in the IDF. And it should certainly not be taken for granted that you are supporting them from afar. As a mother of three former soldiers, I can’t imagine what it would be like to have children serve when you are so far away. But what I can say is that serving will be a life-altering experience for them where they will make friends that will remain loyal to them forever.”

Some other notable stops on their tour included hearing from accomplished women executives, such as Na’ama Ore of SparkIL, the new peer-to-peer lending platform for supporting Israeli small businesses, visiting the Ethiopian Heritage Center, swimming in the Dead Sea, and touring the magically mystical city of Tzfat.

Since Momentum was founded in 2009, the movement has brought participants from 35 countries to Israel. This flagship Israel program is a partnership between Momentum and Israel’s Ministry of Diaspora Affairs. Momentum is also fully connected to the organizational ecosystem across the Jewish world, maintaining partnerships with approximately 300 Jewish organizations and federations.

The organization was established when Palatnik noticed that communities were struggling to connect women with Jewish values and Israel, and together with eight women from the Washington, DC area developed the concept of a subsidized trip to Israel for Jewish mothers as a transformative investment in the Jewish family. 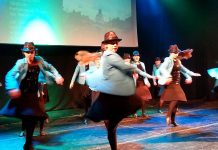