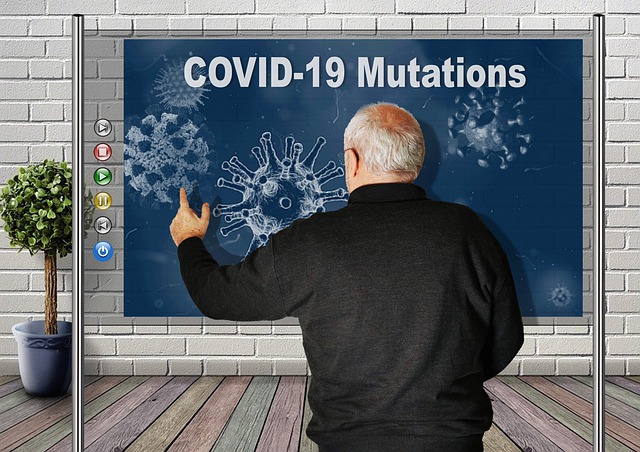 A new Tel Aviv University study reveals that the many SARS-CoV-2 variants are likely formed in chronic COVID-19 patients who suffer from immunosuppression. The researchers suggest that a weakened antibody response, particularly in the lower airways of these chronic patients, may prevent full recovery from the virus and drive the virus to mutate many times during a lengthy infection. In other words, the researchers explain that the virus’ ability to survive and reproduce in the immunosuppressed patient’s body without restriction leads to the evolution of many variants. Furthermore, the variants found among those chronically ill with COVID-19 bear many of the same mutations in their evolution as those present in variants of concern for severe illness, particularly those mutations associated with evading disease-killing antibodies. The new findings indicate that while rapidly-spreading variants are rare among the many strains borne from immunosuppressed patients, the likelihood increases and they do arise when global infection rates boom.

The study was led by Prof. Adi Stern and Ph.D. student Sheri Harari of the Shmunis School of Biomedicine and Cancer Research at the Wise Faculty of Life Sciences at Tel Aviv University, in collaboration with Dr. Yael Paran and Dr. Suzy Meijer of Tel Aviv Sourasky Medical Center (Ichilov). It was published in the prestigious journal Nature Medicine (Drivers of adaptive evolution during chronic SARS-CoV-2 infections).


Prof. Stern explains that since the outbreak of COVID-19, the rate at which the virus evolves has been somewhat puzzling. During the first year of the pandemic, a relatively slow but constant rate of mutations was observed. However, since the end of 2020, the world has witnessed the emergence of variants that are characterized by a large number of mutations, far exceeding the rate observed during the first year. Various scientific hypotheses about the link between chronic COVID-19 patients and the rate of the accumulation of mutations have surfaced, but nothing definitive has been proven yet. In this new study, Prof. Stern and the team shed light on some pieces of this complex puzzle and try to answer the question of how variants are formed.

Prof. Stern explains: “The coronavirus is characterized by the fact that in every population, there are people who become chronically infected. In the case of these patients, the virus remains in their bodies for a lengthy period, and they are at high risk for recurrent infection. In all of the cases observed so far, these were immunocompromised patients – part of their immune system is damaged and unable to function. In biological evolutionary terms, these patients constitute an ‘incubator’ for viruses and mutations – the virus persists in their body for a long time and succeeds in adapting to the immune system, by accumulating various mutations.”

The study involved an examination of chronic COVID-19 patients at the Tel Aviv Sourasky Medical Center (Ichilov Hospital). According to Prof. Stern, the results reveal a complex picture; on the one hand, no direct connection was found between anti-COVID-19 drug treatment and the development of variants. On the other hand, the researchers discovered that it is likely the weakened immune system of immunocompromised patients that creates pressure for the virus to mutate. In fact, the researchers found that there were chronic patients who showed a pattern of apparent recovery, followed by recurring viral infection. In all of these patients, a mutated form of the virus emerged, suggesting that recovery had not been achieved; this is partially reminiscent of the modus operandi of HIV following inadequate drug treatment.

Upon closer examination of some patients, the researchers found that when such a pattern of apparent recovery is observed (based on negative nasopharyngeal swabs), the virus continues to thrive in the lungs of the patients. The researchers, therefore, suggest that the virus accumulates mutations in the lungs, and then traverses back to the upper respiratory tract.

Prof. Stern concludes: “The complexity of coronavirus evolution is still being revealed, and this poses many challenges to the scientific community. I believe that our research has succeeded in peeling back a missing layer of the big picture, and has opened the door for further research efforts to discover the origins of the various variants. This study highlights the importance of protecting immunocompromised individuals, who are at high risk for the virus, yet may also be an incubator for the formation of the next variant, posing a risk to all of us.”