On a Saturday night one week ago, United Hatzalah volunteer EMT Avi Bismouth responded to a medical emergency involving a dehydrated man in an address of a man he had helped once before. Bismouth, recognizing the address, knew that the man was in dire need of assistance and rushed to help. Arriving in less than three minutes, Bismouth found the man’s apartment in a state that was unfit for human habitation, and the resident unable to get out of bed to eat or go to the bathroom.

“The smell of the apartment can’t be described, it was almost tangible,” Bismouth recounted.


“The house was dark, filled with garbage and feces on the floor and rats everywhere. There was mold on all of the walls and the ceiling, almost on every surface. People would bring the man food and leave, but the man was unable to reach for it. When I went into the man’s room, I saw that he wasn’t even able to go to the bathroom and instead was simply lying in bed covered in filth. I immediately brought him water, since he complained of terrible thirst. When the ambulance arrived, he refused to be taken to the hospital so the ambulance crew looked at the man and refused to touch him. Once he refused, the ambulance team turned and left. But I couldn’t leave him like that.”

Bismouth went downstairs to buy food and drink for the man and stayed to make sure he ate. He then left, couldn’t sleep that night. Around midnight, he uploaded images he had taken of the man’s apartment to his personal Facebook page with a plea for people from the community to join him in helping this man get back on his feet.

Instantly, he started receiving replies from friends who also couldn’t tolerate that anyone was living in these conditions in Israel. People offered their professional help, money, and food. his phone was buzzing with calls. “People were calling me all night long,” Bismouth said. “It didn’t matter what time it was. Once they saw the photos they called me and offered to help.”

By the time the morning came, other United Hatzalah volunteers, together with community members of Ramat Gan and Givatayim, were united behind Bismouth’s efforts and set up shifts to come up, clean, and renovate the apartment. United Hatzalah employee Batsheva Soussan arranged for teams of volunteers to come from the Jerusalem area to help out.

“On Sunday morning, half a dozen people came to the apartment to clean,” Bimouth recalled. “I bought a lot of bleach and began pouring it all over the bathroom and kitchen. Other United Hatzalah volunteers dealt with the garbage and filth. We worked through the day and in the evening other members of the community joined us after they returned from work.”

By the end of Monday, the team of volunteers under the guidance of Bismouth and Soussan had cleaned the apartment, thrown out the man’s furniture, bleached and painted the entire space, and bought the man a new bed and new sheets. United Hatzalah volunteers from all over the country donated furniture and bedding as well as other supplies. A lawyer volunteered to deal with all of the man’s legal issues for free. An accountant volunteered to help the man with his critical financial situation. A manicurist/pedicurist came to treat and clean the man’s hands and feet, and a nurse from a nearby hospital came to bathe the man and assess his medical condition.

“It was amazing to see how the volunteers of United Hatzalah and the community as a whole banded together to help this man. We had an air conditioner repairman come and install new units in his home and an electrician came to fix the man’s lighting. All of this was done in the span of a few days. A contractor has agreed to redo the man’s kitchen and bathroom, in the near future using the funds donated by the community as well as some of his own money, making both the bathroom and kitchen more accessible for the man.”

“Over the past few days, the man has been receiving therapy and will continue to receive regular visits from a physiotherapist who has volunteered to help. She has already helped him sit up and move his feet off the bed,” Bismouth related.

Bismouth remains hopeful that now that people are working together to assist him, the man’s life will continue to improve. “We hope that by next week he will be able to walk on his own. We brought him a walker and canes, and right now he is getting over his anxiety and fear of falling. He has had some bad falls in the past few months and is afraid of getting stuck on the floor. He has a bad back problem, but with continued rehabilitation and therapy, he can get up and walk and in a few months, or maybe even a year, he will be able to get back to a normal life. He is only 66 years old. To let him live the way he did would be a tragedy that I just couldn’t stomach, and, gratefully, a lot of people agree with me.”

After the apartment was cleaned, the man asked Bismouth to help him put on Tefillin so he could pray. “He hadn’t been able to put on tefillin for the longest time,” Bismouth said. “When I first came into the house, the man asked me to help him say vidduy (confession) because he thought he was going to die. Five days later he had a new beginning and was able to pray with honor and dignity. Out of everything, this was the most meaningful moment for me.”

Bismouth had come to the same man’s assistance a few months ago, after he had a fall. Bismouth was responding to an emergency alert and found the man lying on the ground away from his home.

“After the fall he was unable to get up and I couldn’t pick him up,” Bismouth recalled. “It was a hot day and the ground was so hot that he was getting scalded by the pavement. I went to the corner store and purchased a six-pack of water and poured it on the man to cool him and the ground around him so that he wouldn’t get burned. When the ambulance arrived, the man refused to go to the hospital. The crew helped me pick the man up and I drove him home to his apartment in Ramat Gan. This is when I first met the fellow and for the first time saw how he lived. Back then he was still able to move somewhat but even then his home was a disaster. I reported the incident to the local social workers in the hope that they would follow up and assist the man. But sadly, for whatever reason, it didn’t happen.”

Bismouth noted that in two days more than 1,000 people volunteered, donated, and offered to help in any way they could, in response to his Facebook post. “Right now we have galvanized a veritable army of people who are willing to help out of the goodness of their heart,” he said. “Many are from United Hatzalah and others are rank and file members of the community. Together with a few other people, I’m trying to organize an ongoing group that will pool the resources and help others like this man who are in dire need of assistance and are living right here in our community in Ramat Gan and Givatayim.” 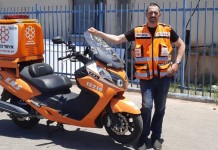