Holocaust survivor Eddie Jaku who survived the Auschwitz extermination camp and became famous for his book and lectures in which he called himself “the happiest man on earth,” died in Sydney, Australia, on Wednesday, at the age of 101. He is survived by his wife of 75 years, his sons Andre and Michael, four grandchildren, and five great-grandchildren.

Jaku was born in 1920 as Avraham Jakubowiez in Leipzig, to a family that saw itself as German first and Jewish second. The rise of the Nazis in the 1930’s changed the young boy’s mind, especially after he had been severely beaten during Kristallnacht in November 1938 and transferred to the Buchenwald concentration camp.


He managed to escape with his family to Belgium and France, but they were captured and transferred to Auschwitz. On the way, Jaku, his parents, and his sister managed to escape and his in Belgium. In October 1943, the family was captured again and sent to Auschwitz, where the parents were murdered. Jaku escaped during the 1945 Death March from Auschwitz to Dachau in Germany and hid in the woods until Allied soldiers rescued him.

In 1950 Jaku moved to Australia with his wife Flora and the two had two children. He ran a service station and a real estate agency. In 1992, he was one of the founders of the Jewish Museum of Sydney, where he volunteered for years, using his personal story to convey messages of peace, tolerance, and forgiveness.

Jaku said he had pledged to smile every day, and in 2019 he appeared in a TED talk entitled “The Happiest Man on Earth” and gained international acclaim.

In a speech in Sydney in 2019, Jaku said: “I do not hate anyone. Hate is a disease which may destroy your enemy, but will also destroy you. Happiness does not fall from the sky. It’s in your hands. I’m doing everything I can to make this world a better place for everyone.”

So sad to see this news. Eddie Jaku was such an inspiration. https://t.co/0V6sOi8xIm 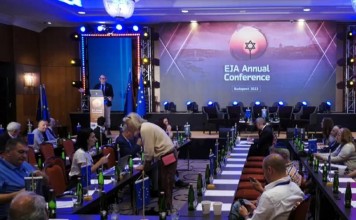