Thousands of Breslov Hassidim stuck at the Belarus-Ukraine border for days are refusing to leave beside the extremely difficult conditions, and they are blaming Israeli government officials for their current circumstances as well.

The Hasidim contend that the Israeli government “pressured” Ukraine into shutting its borders over fears of contagion from the coronavirus pandemic. They are also accusing Orthodox lawmakers of being “uncaring and evil” when they failed to win approval for their pilgrimage.

Meantime, Ukraine officials have heard from Israel’s Foreign Ministry and from Interior Minister Aryeh Deri, asking for various compromises in order to allow the pilgrims into Ukraine long enough to escape their current “inhumane” circumstances.

The Hasidim arrived at the border in the hope of reaching the tomb of Torah sage Rabbi Nachman of Breslov, their leader and Hasidic rebbe who died in 1810. Tens of thousands of Jewish pilgrims flock each year to the tomb in the Ukraine city of Uman to pray at the tomb of the Rebbe from Rosh Hashana through Yom Kippur.

Ukraine has banned foreigners from entering due to a spike in COVID-19 cases.

But more than 2,000 Hasidic Jewish pilgrims have gathered at the closed Ukraine-Belarus border, leading to a standoff with border guards. pic.twitter.com/ztAf7sr9vV

But this year due to the coronavirus pandemic, Ukraine closed its borders to foreign travelers – including the pilgrims – from Sept. 1 through Sept. 28.

Nevertheless, by Monday night there were some 2,500 Hasidim in Belarus, some with young children, on the border with Ukraine who insisted on traveling anyway, all in the hope of making it to the tomb of the Rebbe despite the ban.

They ended up sleeping out in the open, in the cold on Monday night.

Belarus eventually provided large tents and some chemical toilet facilities for them. Ukraine sent a few caseloads of food in trucks. The International Red Cross likewise arrived to distribute food, water, hot drinks and blankets – enough for nearly half of those who are there. Sandwiches were donated by a Breslov supporter – again, enough for about half of those stranded on the border.

But those who now are still refusing to leave were also told from the start – weeks before they boarded the planes — that they would not be able to make it to Uman this year. And they are still hearing officials literally beg them to take their children and leave these “inhumane” conditions to go home to their families.

“Ukraine has shut its borders to foreigners, and no exclusions will be made for the Hasidic pilgrims,” Ukraine’s Interior Ministry official Mykhailo Apostol told reporters in a briefing. “It’s getting colder and we suggest that they come back to Belarus, buy tickets and go home.”

So far, no one is taking the officials up on the offer. 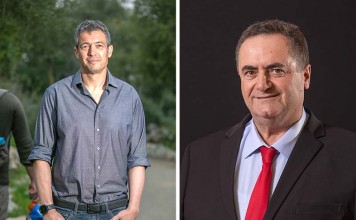