Computed tomography scans (CT) have revealed new information about the pharaoh Amenhotep I, who ruled Egypt from 1526 to 1506 BCE, before the Biblical Exodus. Amenhotep I’s mummy was discovered in 1881, but until recently archaeologists have refrained from unwrapping it to preserve its exquisite face mask and bandages.

In an article they co-authored for Frontiers in Medicine (Digital Unwrapping of the Mummy of King Amenhotep I Using CT), Sahar N. Saleem of the Department of Radiology, Kasr Al Ainy Faculty of Medicine, Cairo University, and Zahi Hawass, of Antiquities of Egypt, reported that they hypothesized that non-invasive digital unwrapping using CT would provide insights on the physical appearance, health, cause of death, and mummification style of the mummy of King Amenhotep I.


They discovered, among other things, that all of the Pharaoh’s teeth were accounted for; they found no evidence of periodontal disease; no evidence of bone diseases or joint degeneration; and evidence of a circumcision.

“We examined the mummy with CT and generated two- and three-dimensional images for the head mask, bandages, and the virtually unwrapped mummy,” the two Egyptian scientists wrote. “CT enabled the visualization of the face of Amenhotep I who died around the age of 35 years. The teeth had minimal attrition. There was no CT evidence of pathological changes or cause of death. The body has been eviscerated via a vertical left flank incision. The heart is seen in the left hemithorax with an overlying amulet. The brain has not been removed.”

“The mummy has 30 amulets/jewelry pieces including a beaded metallic (likely gold) girdle,” they wrote. “The mummy suffered from multiple postmortem injuries likely inflicted by tomb robbers that have been likely treated by 21st Dynasty embalmers. These included fixing the detached head and neck to the body with a resin-treated linen band; covering a defect in the anterior abdominal wall with a band and placing two amulets beneath; placement of the detached left upper limb beside the body and wrapping it to the body.”

“The transversely oriented right forearm is individually wrapped, likely representing the original 18th Dynasty mummification and considered the first known New Kingdom mummy with crossed arms at the chest. The head mask is made of cartonnage and has inlaid stone eyes. The digital unwrapping of the mummy of Amenhotep I using CT sets a unique opportunity to reveal the physical features of the King non-invasively, understand the mummification style early in the 18th Dynasty, and the reburial intervention style by 21st Dynasty embalmers,” they wrote, and noted: “This study may make us gain confidence in the goodwill of the reburial project of the Royal mummies by the 21st dynasty priests.”

The two scientists concluded that the digital unwrapping of the mummy of Amenhotep I using CT sets a unique opportunity to reveal non-invasively the physical features of the King, understand the mummification style early in the 18th Dynasty, and recognize the reburial intervention done in the 21st Dynasty. 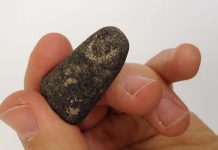