Egyptian construction companies have been contracted to do the work of rebuilding parts of Gaza that were damaged or destroyed during different rounds of fighting between Hamas and Israel. Egypt sees this as only natural as it has provided millions in funding for the projects, but local Gazan firms are crying foul.

Following criticism made by senior Hamas figures over what they say is the slow Egyptian conduct in the Gaza reconstruction work, the secretary of the Association of Construction Companies (ACC) in the Gaza Strip on Sunday told the media, “the association opposes the entry of workers and companies from abroad for the purpose of rehabilitating the Gaza Strip.”


Muhammad al-Azar, the head of the ACC, said that “the local construction plants are ready to begin construction operations and have extensive experience of the rounds of confrontation in the Strip. They have proven their efficiency and compliance with international standards in the execution of projects.”

Sources in the Gaza Strip told TPS that Egyptians recently visited the various factories there and that they got the impression that the factories were ready for the construction and rehabilitation missions. The sources in Gaza add that from their contacts with the Egyptians, they were under the impression that the Egyptians would supply raw materials to the Gazan factories, for whom the rehabilitation work is an opportunity to be compensated for all the damage and financial losses caused to the private sector in Gaza due to the clashes with Israel.

The news comes amid fears in Gaza that Egyptian companies will benefit from the profits involved in the rehabilitation operations. Egypt is working to bring contractor companies into the Gaza Strip after announcing that it is allocating $500 million for the rehabilitation program.

The Lebanese newspaper Al-Akhbar states that Egypt is operating “at a turtle’s pace”, and has so far met only 5% of its commitments to rehabilitate the Gaza Strip, and claims that this is an Egyptian way of pressuring Hamas.

Sources in the Gaza Strip claimed that Egyptian workers are slow. This, they add, causes jobs that should be finished in only a single day of work to last for two weeks or more. They also say that Egyptians require fuel, housing, and other supplies for their workers, all of which cost money. 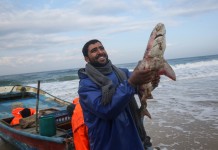