Prime Minister Benjamin Netanyahu said that Israel may be required to make “courageous and independent decisions” in its fight against the Islamic Republic’s attempts to develop nuclear weapons, an apparent signal to Washington, which is engaged in formulating a new nuclear agreement with Tehran.

Speaking Monday night at an event in which he awarded the Prime Minister’s Prize for Mossad Operations, Netanyahu noted that he “very much appreciate our friend, the US, which has stood at our side for many years. This is part of our national security.”


However, “there could be a situation in which our paramount goal – ensuring that the ayatollahs do not put a stop to the existence of the Jewish people, which has continued for thousands of years – will require us to make courageous and independent decisions. The State of Israel will not allow Iran to arm itself with nuclear weapons,” he vowed.

“In any case, with or without an agreement [between the US and Iran], we will do everything to prevent Iran from arming itself with nuclear weapons and this is because it concerns our existence,” he underscored.

Netanyahu made the forceful remarks hours before US Secretary of State Antony Blinken was slated to arrive in Israel for talks on the ceasefire with Hamas.

Jerusalem is fearful of the new agreement that is taking shape between the Biden administration and Iran, which Israel believes will ultimately enable Iran to build nuclear weapons.

In a rally in Tehran in 2017, Iran unveiled a digital clock in the city’s Palestine Square counting down the days to what it says will be the destruction of Israel in 2040.

The time frame appears to stem from comments made in 2015 by Iran’s Supreme Leader, Ayatollah Ali Khamenei, who vowed there will be “nothing” left of Israel by the year 2040.

In September 2015, Khamenei proclaimed, “You [Israelis] will not see the coming 25 years and, God willing, there will not be something named the Zionist regime in next 25 years.” 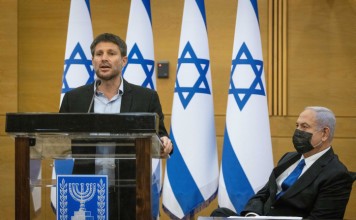