The Syrian Observatory for Human Rights reported a loud explosion overnight in the village of Al-Hurriya in the province of al-Quneitra, in southern Syria, believed to be an Israeli shelling that targeted the headquarters of Iranian militias in the area. No casualties have been reported so far.

Syrian TV reported it was a rocket fired from Israel that hit a school in Al Horriya, and a radio station affiliated with the Syrian regime reported property damage.


The last time an attack in Syria was attributed to Israel was more than a month ago. Syrian television reported back then that the country’s air defense systems had been activated following an Israeli attack in Aleppo in northern Syria. Various media outlets reported that the attack was carried out in the a-Sefirah area, where factories belonging to the Syrian Ministry of Defense are located. It was believed that the target of the attack was a missile component factory south of Aleppo. 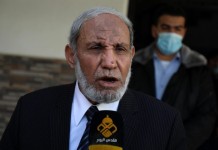