Israel and the People of Israel have lost a true and humble Zionist: Brooklyn-born Naava Livneh (Greenberg), who died recently, only three weeks after being diagnosed with cancer.

Naava was the kind of person one usually meets only in the history books of the first years of the modern Zionist movement – working and volunteering anywhere there was a need and without looking for or expecting reward. Her youngest daughter Ayana expressed it best in her eulogy of her mother, saying Naava knew that true reward comes from “walking humbly with your God” (Micah 6:8).

What university graduate these days would agree to take on the unglamorous work at a small grocery store in a tiny and remote community, to make sure residents receive their basic needs?

Who would work day and night to establish a library system in a remote area, receiving pay for only half a day?

Who, at the age of 64, would take off half a day every week to herd sheep on a lonely hilltop, menaced by Arab and Bedouin thieves, and also guard her handful of Jewish neighbors in the middle of the night more than once each month, not losing a moment’s work the next day?

That was Naava, a remarkable, modest and rare Zionist who endangered her life to work for Soviet Jewry and pursued a modest life dedicated to helping others wherever needed.

Naava studied psychology at Brooklyn College. In 1977, she and her husband Chaim made Aliyah with her Bnei Akiva group, settling in a National-Religious kibbutz, where she worked in the fields. After moving to the Southern Hebron Hills community of Beit Yatir in 1984, she managed the tiny grocery store for the residents—the first Jews to live in the area in 1500 years.

She later established the district library, managed the library in Efrat as well, and worked and later managed the Kfar Etzion laundry. Faithful to her ideals, she left the laundry after the kibbutz had sold it to a for-profit enterprise.

At the funeral, Ayana said of her mother: “You always said that … to be a Jew, it is not enough to be a good person. A Jew also has to be a good Jew, to strive to do good … and act responsibly not only for ourselves but for all future and previous generations and those who did not merit to be in the Land of Israel.”

Dr. Rachel Levmore, director of the Agunah Prevention Project of the Young Israel movement in Israel, eulogized Naava as “having the strength of steel with a gentle touch of softness.” Dr. Levmore told hundreds of mourners at the funeral that Naava was one of a small number of girls who joined a mostly-boys Bnei Akiva group to travel to the Soviet Union in the 1970s, to strengthen the will of Prisoners of Zion.”

That project was dangerous, as the KGB could arrest them at any time. One time, secret-service agents detained and questioned the group. “The delegation went despite the dangers of the trip,” Dr. Levmore said at the funeral, but back when Naava was asked about her terrifying experience, she replied, “It’s not a big deal.”

Tuvia Gross, a member of Kibbutz Ein HaNatziv who grew up with Naava, wrote: “At the very beginning of Pirkei Avot, we learn that Shimon HaTzadik said, ‘The world stands on three things – Torah, service, and loving kindness.’ If there was anyone who epitomized a life of these three virtues – it was Naava. Hers was a home of Torah, a home of ‘No labor demeans its laborer – all labor is honorable,’ and a life of unfathomable giving.”

Her husband Chaim said of Naava at the funeral: “Your modesty was external as well as internal, in dress, in the house, personally and in your outlook on life. You always related to everyone with pleasantness, and if the time had come to close the grocery store or library or laundry, someone would arrive at the last moment and past the last minute, but it didn’t make any difference – you tried to help.

“Money was a means, not an end for you, and a means to do good…. [You always helped] everyone who had extended an arm. You always quoted your grandfather, who said that he gives to everyone on behalf of the one out of every ten who really needs money….

“We prayed to HaShem for a full recovery, and HaShem answered us, but, to our sorrow, it was not the answer we expected.”

The Beit Yatir community wrote to its residents about Naava she that had “zero ego.”

Naava Livneh is survived by her husband Chaim, seven children and 18 grandchildren, her parents, two brothers and a sister, all of whom live in Israel, 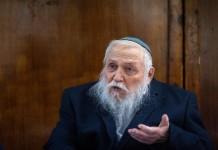