Israel has imposed a naval blockade on Gaza in response to the ongoing arson attacks on southern Israel launched by Hamas-led terrorists via incendiary balloons flown across the border.

“Due to the continuous launching of incendiary balloons and kites from the Gaza Strip towards Israel it has been decided tonight (Wednesday) not to allow access to Gaza’s maritime space until further notice,” a spokesperson for the IDF Coordinator of Government Activities in the Territories (COGAT) said in a statement.

Eight Israeli fields were set ablaze on Wednesday alone – one day after a similar number of fires were started in agricultural fields and forests in southern Israel by incendiary balloons launched by Hamas arson terrorists.

But for the first time since the declaration of the so-called “ceasefire” on the Gaza border, two explosive balloons were also fired at Israel from across the border. They exploded over a Jewish community in the Eshkol Regional Council district. Miraculously, no one was injured and no damage was caused.

So far this week, there have been 20 fires started in southern Israel’s Gaza Belt region by Gaza arson terror attacks, using incendiary balloons flown across the border.

On Tuesday, the IDF announced it was once again shrinking the Gaza fishing zone in response to the terror, this time to six nautical miles. The move was completely ineffective.

IDF Arabic-language spokesperson Lt.Col. Avichai Adrei wrote a message to Gaza residents in response on Wednesday, warning in a post on Twitter:

“The fishing industry in Gaza is one of the leading commercial fields in the Gaza Strip. Are there fish that are more tasty than those of Gaza? Unfortunately, and in view of the continued launching of firebombs from Gaza into Israel in order to burn fields, the State of Israel is forced to reduce the fishing area.

“In this way, the terror that emanates from Gaza first of all harms the residents of Gaza.

“Residents of Gaza, do not let the terrorist leaders steal from you what Allah has given you.”

Just last week Israel had expanded the Gaza fishing zone to 15 nautical miles after previously shrinking it in response to another round of arson terror attacks on southern Jewish communities in the Gaza Belt area.

More than half of the southern Israeli forest land was burned to the ground last year by Gaza arson terrorists. 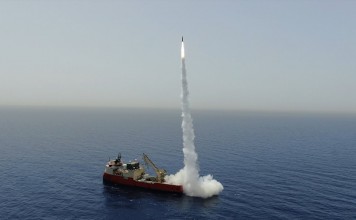