Gaza terrorists were busy late Wednesday night and into the wee hours of Thursday, launching first one rocket, and then what was originally thought to be a second, third and fourth barrage of rockets at southern Israel.

Families in Sderot and the Sha’ar HaNegev Regional Council district were forced to race to their safe spaces and bomb shelters, waking their children to get them to safety.


In the fourth wave of rocket alerts, four launches were detected as aimed at Sderot, with the IDF using 16 Tamir interceptor missiles from the Iron Dome aerial defense system to shoot them down at around 2:34 am Thursday.

Only, the IDF said it turned out all the subsequent attacks after the first were anti-aircraft gunfire from Gaza, which Iron Dome detected as rocket launches and then launched interceptor missiles.

A 70-year-old man was taken with severe anxiety to Ashkelon’s Barzilai Medical Center during the first rocket attack.

One Israeli reportedly sustained minor injuries in the third wave of rocket fire.

There was no immediate word on injuries or damage.

Sderot Mayor Alon Davidi, told reporters at the scene of the first rocket attack that “the expectation is clear – that it will be quiet here and that the people who fired this rocket will be underground. I think we all understand today that our enemies are outside our country, in Gaza and Lebanon.

“We understand that Hamas used the ‘quiet’ period to arm itself. I repeat: the citizens of the State of Israel must live in peace and security. The ones who should be in fear are Hamas and those who fired these rockets. They should be hurt,” Davidi added.

Israel’s Iron Dome Fighters and Combat Pilots
In response to the rocket fire, the IDF attacked an underground structure with chemicals used to manufacture rocket engines, a military post and the opening of a terrorist tunnel that led to the chemical storage area, according to the IDF Spokesperson’s Unit.

The below footage was recorded from security cameras showing the barrage of rockets targeting Sderot, and the interceptions by the Iron Dome anti-missile defense system.

Multiple explosions were heard by Jewish residents in the area, and the glass in one home was shattered by the “booms,” residents said.

IDF publishes footage of strikes in Gaza tonight in response to the rocket attack on Sderot pic.twitter.com/dctYwMrc0H

That rocket, which landed in the yard of a home in Sderot, carried hundreds of iron balls inside the warhead that were intended to shatter upon explosion or impact, thus inflicting as many casualties as possible.

The air strikes carried out in retaliation, said the IDF,”will lead to significant damage to the rocket production process in the Gaza Strip.

“The Hamas terrorist organization is responsible for what is happening in the Gaza Strip,” the IDF added.

Combat aircraft flew sorties over at least four different areas in northern and central Gaza, including three strikes aimed at Ubeida, in which there was an unconfirmed report that occupants of a building were not given any “knock on roof” warning ahead of the strike.

Hamas ambulances were allegedly seen heading towards the sites of attacks in Ubeida and Abu Jarad.

In response to the retaliation, the Iranian-backed Palestinian Islamic Jihad terrorist organization warned in a statement, “If the occupation continues with the aggression in the Gaza Strip, Ashkelon and Ashdod will experience the fire tonight. The bomb equation will be answered with an equivalent bombing.” 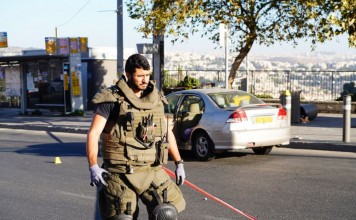