Secretary of State Antony Blinken said in an address to the J Street National Conference this week that the Biden Administration will gauge the incoming Israel government led by Benjamin Netanyahu by its policies, and not by its coalition personalities.

He also reiterated the administration’s unending support for the moribund two-state solution, saying that Israel’s normalization with its neighbors “is not a substitute for building peace between Israelis and Palestinians.”

Blinken said the administration “fully respects” the democratic choice of the Israeli people.”

President Joe Biden informed incoming Prime Minister Benjamin Netanyahu during his belated call to congratulate him that his administration expects the incoming government “to continue to work with us to advance our shared values.”

Blinken said the administration will continue to express its support for “core democratic principles, including respect for the rights of the LGBT community and the equal administration of justice for all citizens of Israel” – a dig, albeit without names, clearly aimed at extreme right-wing Noam party leader Avi Maoz, who campaigned on rolling back rights for the LGBT community. In the new government, Maoz is slated to become a deputy minister in the Prime Minister’s Office, to determine curriculum in Israeli public schools and to control Nativ, which handles Jewish immigration from former USSR countries.

While avoiding any declaration that the Biden administration intends to boycott Maoz, along with incoming right-wing ministers Otzma Yehudit leader Itamar Ben Gvir and Religious Zionism chair Bezalel Smotrich, Blinken made it clear the administration is watching closely.

“We will gauge the government by the policies it pursues rather than individual personalities. We will hold it to the mutual standards we have established in our relationship over the past seven decades. And we will speak honestly and respectfully with our Israeli friends, as partners always should,” he said. “Preserving a horizon of hope also requires that we work relentlessly to prevent any parties from taking actions that could raise tensions or further raise tensions and push the two-state solution even further out of reach.”

Blinked thanked the far-left organization “for the work that you’re doing – today but also every day – to advance peace and democracy.

“The enduring engagement of J Street, as well as other groups across the spectrum that we consult with regularly, including in recent days, continues to inform our thinking,” he said.

The Secretary also sought to comfort J Street members that “progress is still possible” on forcing Israel to accept a suicidal two-state solution.

“I know that many people are disillusioned. Many people are frustrated. We’ve been trying to get to a two-state solution for decades, and yet it seems that we’ve only gotten further away from that goal. But we cannot afford to give up hope,” he said.

“We cannot succumb to cynicism. We cannot give in to apathy. It’s precisely when times are difficult – when peace seems even further from reach – that we’ve simply got to work harder, that we must continue to pursue whatever openings we can to show that progress is still possible.”

Blinken also emphasized America’s “ironclad commitment to Israel’s Security,” and its $3.3 billion annual foreign military funding to the Jewish State “as well as another $500 million in funding for missile defense” – most of which comes back to the US in the form of military industry purchases to Israel (a requirement of such funding) and joint defense research.

In addition, the Secretary said the US “continues to reject the global Boycott, Divestment and Sanctions movement for unfairly singling out Israel,” fights anti-Israel bias at the United Nations and fights antisemitism “which is once again on the rise around the world, including here in the United States.” 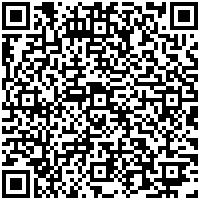