Multiple people were injured early Monday morning in a two-alarm fire at a mixed-use four-story residential building at 265 Penn Street in the Williamsburg section of Brooklyn.

All those who were trapped in the building were rescued, with FDNY and Hatzolah medics treating 17 people injured in the blaze, including one person in cardiac arrest and a second in critical condition, according to the FDNY and Williamsburg News.

Medics from the local Hatzolah emergency medical response service requested ambulances from surrounding areas to help contend with the numerous injuries. In response, ambulances were dispatched from the Brooklyn neighborhoods of Crown Heights, Flatbush, Borough Park and Manhattan’s Lower East Side.

“FDNY has the fire under control,” the news outlet reported.

Multiple FDNY fire trucks and personnel were on the scene with ladders up and pointed at various apartments in the building to facilitate rescue for those inside.

There are a total of six residential apartments in the building in addition to a commercial unit. 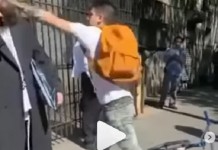