NYPD Hate Crimes reported that on Sunday, around 10:45 AM, a man, 21, was waiting for a store to open when an individual made anti-Jewish statements and punched him in his face multiple times before fleeing on foot on 86th St towards 4th Ave in Brooklyn. Anyone with information about the assailant’s whereabouts is asked to contact 1-800-577-TIPS.


The NY Post report is slightly different: apparently, the attack was on two Jewish men, Brooklyn residents Blake Zavadsky and Ilan Kaganovich, both 21, who were waiting outside the Foot Locker in Bay Ridge just before 11 AM Sunday, and were attacked by two individuals who called them “dirty Jews” and one of the attackers punched one of the Jews in the face because he was wearing an IDF hoodie.

Zavadsky told the NY Post: “They asked us what we were doing in their neighborhood. They called us ‘dirty Jews.’”

The attacker insisted that Zavadsky take off his sweatshirt, and when he wouldn’t, he punched him twice in the face and poured his ice coffee on him.

Zavadsky attends the College of Staten Island, Kaganovich goes to Brooklyn College. Kaganovich said the attackers threatened him not to intervene. Zavadsky says he’ll keep on wearing his IDF hoodie: “You can’t be scared to walk outside and say you’re Jewish. You have to be proud of who you are and stand up for what you believe — and not be intimidated.”

NY Governor Kathy Hochul feels the same way. She tweeted Monday night: “Yesterday, two Jewish men were verbally & physically attacked in Brooklyn. This is abhorrent and unacceptable. Antisemitism & all hate has no home in New York.”

This is abhorrent and unacceptable. Antisemitism & all hate has no home in New York.

City Councilwoman Inna Vernikov, whose parents came to America from Ukraine, told the NY Post: “These boys’ families escaped the Soviet Union precisely because of incidents such as this one. Jews were beaten, jailed, and ostracized from society just for being Jewish. We escaped to this country for freedom of religion, and here we go again, getting beaten up in broad daylight in the middle of Brooklyn, NY, in the United States of America.”

I’m tempted to say I know a place where wearing an IDF sweatshirt is actually encouraged for men ages 18 to 21, and where the Foot Locker stores open at 9:30 AM, but maybe I shouldn’t. 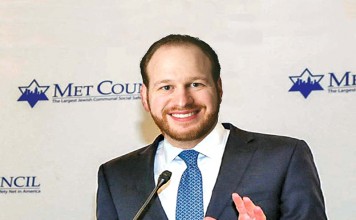