Scientists are paying close attention to the way COVID-19 attacks the hemoglobin in the red blood cells of those who become ill with the novel coronavirus. Hemoglobin is a protein in red blood cells that transports oxygen through the arteries.

Iron in the hemoglobin, binds to the oxygen and facilitates its transport from the lungs via the arteries to all the cells throughout the body. When the body detects too much iron, the body’s cells release a protein called ferritin to absorb the excess iron to prevent iron overload.

Iron not in the hemoglobin is normally stored for later use in the cells, in the ferritin protein. High levels of ferritin can indicate excess levels of iron in the body.

Researchers are desperately trying to discover why COVID-19 patients have shortness of breath, as well as show low blood-oxygen levels (hypoxemia), reaching dangerous levels (hypoxia) in the more severe form of the illness. Until now, this has been primarily attributed to the virus attacking the lungs, preventing the lungs from transferring oxygen to the blood.

Oxygen levels in the blood can be easily detected using a fingertip pulse oximeter.

A second study that also reviewed records from patients in China found the majority of hospitalized patients with severe COVID-19 showed “markedly increased” levels of ferritin as well.

A blog slightly off the beaten track is focusing on research into COVID-19, has published information about this issue.

Chinese researchers Dr. Liu Wenzhong, PhD from Sichuan University of Science & Engineering and associate professor Hualan Li from Yibin University found the RNA of the virus codes for a number of non-structural proteins which then hijack the red blood cells and attack the hemoglobin, removing the iron ions from the “heme groups” (HBB) within the hemoglobin and replacing themselves in their stead.

This makes the hemoglobin less and less able to carry oxygen and carbon dioxide. The lung cells sustain “extremely intense poisoning and inflammation due to the inability to exchange carbon dioxide and oxygen frequently, which eventually results in ground-glass-like lung images,” the researchers write.

As a result the lungs are stressed out and inflamed while the rest of the organs are also being affected. The so-called ARDS and subsequent organ failure could be attributed to this. The high levels of iron, suspected to no longer be in the hemoglobin, are being absorbed by the ferritin, which could explain why the the ferritin levels might be higher.

NYC Doctor: Patients Need Oxygen, But Not Pressure
One New York City-based doctor says the treatment now being used for many of the hospitalized COVID-19 isn’t doing them any good — and may be doing them real harm.

Dr. Cameron Kyle-Sidell, a board-certified emergency medicine physician at Maimonides Medical Center says it became clear to him early in the process of treating COVID-19 patients that he was dealing with a new disease. But it was also clear that the treatment didn’t fit the disease.

“The patients in front me of are unlike any I’ve ever seen,” he told Medscape in an interview. “They looked a lot more like they had altitude sickness than pneumonia.”

Kyle-Sidell attended medical school at Ben Gurion University of the Negev, did his residency in Emergency Medicine at Detroit Medical Center and is licensed in New York and Pennsylvania.

COVID-positive patients need oxygen,” Kyle-Sidell said in his video. They do not need pressure. They will need ventilators – but they must be programmed differently.”

He added that although it is a lung disease, it is not pneumonia, but rather seems to be “some kind of viral-induced disease most resembling high altitude sickness. It is as if tens of thousands of my fellow New Yorkers are on a plane at 30,000 feet and the cabin pressure is slowly being let out,” he said.

Can Chloroquine Treat COVID-19?
Chloroquine, a medication widely used to treat malaria for more than 60 years, is cheap to produce and is relatively safe and well tolerated, according to Professor Bill Sullivan, who writes in an article for the American Social for Biochemistry and Molecular Biology that chloroquine also has anti-inflammatory properties.

This would not be the first time chloroquine has been “repurposed” to treat a condition other than malaria, Sullivan writes, but adds that there are a number of conditions in which it causes severe reactions and for which it can NOT be used – as with many other medications.

Chloroquine works because it changes the pH of the viral invader’s proteins in a host cell, to give a simplistic explanation. In addition, it can also distort the shape of proteins called cytokines, which are found in the endosomes – acidic vesicles — of immune cells that fight infection. “Sometimes the immune system gets too excited and creates what is called a ‘cytokine storm’ which has been a major complication of COVID-19” Sullivan writes.

It is that ‘cytokine storm’ that heralds the crisis medical personnel speak of when they talk about racing to intubate and sedate a patient, hoping to keep someone alive as they struggle to breathe through the battle taking place in their lungs.

Chloroquine quells the cytokine storm and helps the body fight the infection.

FDA-Approved Nitric Oxide Also a Candidate
Another well-known, FDA-approved drug currently being tested for “repurposing” as a treatment for COVID-19 is nitric oxide, which is known to relax blood vessels.

Massachusetts General Hospital in Boston is to be the first site to test nitric oxide as part of a multi-site international study also taking place in Louisiana, Alabama, Sweden and Austria, using patients infected with the novel coronavirus, according to a report by the Boston Herald.

Dr. Lorenzo Berra, a critical care specialist at MGH, leads the study in Boston, which involves administering inhalations of nitric oxide gas to patients with mild to moderate COVID-19 via a CPAP breathing machine twice a day for 20-30 minutes. The risk profile for nitric oxide is minimal, Berra said.

Dr. Keith Scott, principal investigator of the trial in progress at Louisiana State University Health in Shreveport, LA, said if the results show promise, since nitric oxide is already FDA-approved, “widespread use could begin immediately.”

Other Treatments Being Considered
There are a number of other medications that are being tried by physicians around the United States and elsewhere.

One of those drugs in remdesivir, which in the past has been used for other coronaviruses and is now being tested for use in the fight against COVID-19.

Another is hydroxychloroquine, which is usually used in a cocktail combined with other medications or minerals.

Dr. Anthony Cardillo, CEO at Mend Urgent Care in California, said in an interview with ABC7 in Los Angeles that hydroxychloroquine is being combined with zinc at his hospital, and thus far has had positive results.

Why Some Patients and Not Others?
Scientists are also looking at how the disease runs its course with various patients — in particular, which patients develop the more severe and lethal form of the virus — and how best to identify those symptoms as early as possible, according to a report published by Business Insider.

A new study from researchers at New York University and Wenzhou Central Hospital, in Wenzhou, China, shows one of the ways in which doctors may be able to identify the development of the more severe form of the virus involved the use of predictive analytics narrowed down three symptoms, taken together: an increase in ALT (an enzyme indicating liver inflammation or damage), deep muscle aches, known as “myalgia,” and elevated levels of hemoglobin.

The researchers found the predictive models using these three symptoms led with 70 to 80 percent accuracy to the development of acute respiratory distress syndrome (ARDS).

The study used the records from 53 hospitalized patients in Wenzhou, most of whom were in the 30s and 40s. Of those, close to two-thirds were male. All of the subjects had “ground glass” patches on their lungs when a CT scan was performed.

A multi-center study published in the American Journal of Roentgenology (AJR) last month on the relationship between chest CTs and COVID-19 pneumonia found that most patients with the disease have (GGO) ground-glass opacities (86.1 percent), or mixed GGO and consolidation (64.4 percent) and vascular enlargement in the lesion (71.3 percent.)

Because many New Yorkers cannot or will not be tested, according to numerous state media, the number of people infected with COVID-19 is likely to be far higher.

The total number of cases in New York State reached 159,937 on Thursday, according to The New York Times. The state death toll stood at 7,067 lives that were lost – an increase of 799 in one day, although there were fewer hospitalizations, just 200 from Wednesday to Thursday.

That’s only one state, in one country, but it gives some idea of why researchers are so desperate to find a way to stop the pandemic – or at least, slow it down. 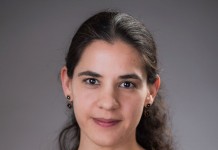 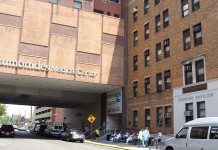