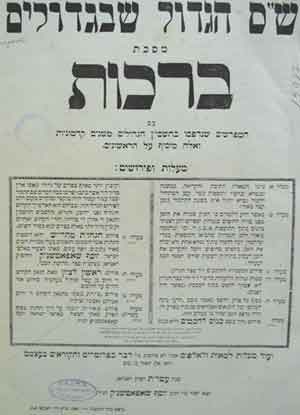 A volume I acquired this week is a remnant of one of the most – if not the most – ambitious projects ever attempted by a rabbinic author. Titled Shas Hagadol Shebagedolim (“Greatest of the Greatest Shas”), the work was the first and only volume of a project that was to include over 3,000,000 pages spanning 3,000 volumes. The idea was to feature over 1,000 commentaries on each daf of the Talmud.

The man behind this project was Rabbi Joseph Shapotshnick, a fascinating and enigmatic personality who lived in London in the early 20th century. Involved in numerous controversies in the local Jewish community, he was a prolific author and active on behalf of the poor Jewish immigrants who were arriving in droves from Eastern Europe at the time.

In the 1920s, Shapotshnick devoted much of his efforts to helping agunot remarry. His activities in this regard were questioned by local rabbis, and many of the signatories on his heterim were found to be forgeries, resulting in the Rabbinical Association of Poland – with the encouragement of R. Chaim Ozer Grodzinski – publishing a book with over 600 signatures condemning Shapotshnick’s activities.

He died suddenly in 1937, and, despite his estrangement from the rabbinic community, over 5,000 people from the immigrant community of East End, London, attended his funeral.