At least 100 protesters were led Sunday by New York City Council member Inna Vernikov and former state assemblyman Dov Hikind in a demonstration against antisemitism in the wake of an attack on a 21-year-old Jewish man last week because he was wearing an IDF shirt.

On at 12/26/21, at approx 1045 AM, a male, 21, was waiting for a store to open when an individual made anti-Jewish statements and punched him in his face multiple times before fleeing on foot on 86th St towards 4th Ave in Brooklyn. Info? DM us or @NYPDTips or ☎️1-800-577-TIPS pic.twitter.com/Szu8yLkbhy


Blake Zavadsky and his friend were asked by the assailant why they were in “his” neighborhood.

Zavadsky, who was wearing an IDF sweatshirt while waiting outside a Foot Locker store in Bay Bridge, Brooklyn, was punched twice in the face and had coffee hurled at him after the attacker called them “dirty Jews,” ordering Zavadsky to take off the sweatshirt before hitting him.

The NYPD said Monday the assault is being investigated as a hate crime. pic.twitter.com/grdJiIacUB

New York City Police said the attack is being investigated as a hate crime.

“This is what we ran from – this is why our families brought us to America – and this is exactly what we’re seeing happening in this country again,” lamented Vernikov, the daughter of Ukrainian immigrants. “These boys’ families escaped the [former Soviet Union] precisely because of incidents such as this one. “Jews were beaten, jailed, and ostracized from society just for being Jewish.”

Thank you to all who joined us today to rally against antisemitism. It was especially heartwarming to see such a diverse turnout.

"Yet another vicious attack on Jewish New Yorkers for the offense of being Jewish. Antisemitism on the streets of New York City has become commonplace."https://t.co/mREctCy7SV

This is abhorrent and unacceptable. Antisemitism & all hate has no home in New York.

The New York-based Anti-Defamation League (ADL) is offering a $5,000 reward for information leading to the arrest of the perpetrator. 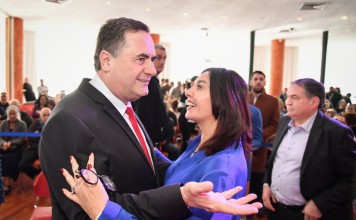