On Tuesday night, Meghan McCain, the late Senator McCain’s feisty daughter, engaged in a tense couple of minutes with Late Night with Seth Meyers host, Seth Meyers, over whether Rep. Ilhan Omar’s (D-MN) had contributed to anti-Semitism in America to the point where she shares the blame for the Chabad of Poway synagogue shooting in San Diego.

It appears to be a bit of a stretch, on its face: John T. Earnest, the 19-year-old white man from the San Diego suburb of Rancho Peñasquitos who fired on the Jewish congregation on April 27, blamed Jews for their “meticulously planned genocide of the European race” with their “white genocide conspiracy theory.” He also praised the killer of a Muslim congregation in a Christchurch mosque.


Here’s what McCain said on ABC News’ This Week With George Stephanopoulos in late April: “When we’re having conversations about anti-Semitism, we should be looking at the most extreme on both sides. I would bring up Congresswoman Ilhan Omar and some of her comments that got so much attention, and in my opinion Nancy Pelosi wasn’t harsh enough on her for trafficking in anti-Semitic language, talking about ‘All about the Benjamins’ and how Jewish people had ‘hypnotized’ the world.”

In other words, whether American anti-Semitism comes these days from the right, the left or the middle, any contribution to the anti-Semitic cauldron coming from a popular official stirs up the overall poisonous brew (see how I stuck to one metaphor?).

Meyers (who is a regular member of left-leaning late night talk show hosts who feed off the perpetual saga of left v. right extravaganza a.k.a. the Trump presidency – offering virtually zero commentary that’s favorable to the president and portraying him as a complete and utter fool), spent the bulk of his McCain segment in an attempt to get her to retreat from her harsh criticism of the Congresswoman from Minnesota.

View the clip here. We will upload a YouTube version as soon as it becomes available.

Meyers began: “You once again, on a Sunday news show, brought up her tweets again in the context of that [San Diego] shooting. I do think it’s fairly dangerous, and you brought it up after Congresswoman Omar had also had some death threats against her. She’s obviously now stated she needs to be more careful with her language. Don’t you think people who talk about her need to be a little bit more thoughtful as well? Or do you stand by those comments of tying her rhetoric to the synagogue shooting?”

McCain said, “I don’t think I tied her to it in particular, I think that I’m calling out what I see as anti-Semitic language.”

“But you called it out after she’d apologized for it. I do want to establish the timeline,” Meyers noted.

“I don’t…I think the Democrats are hedging on this, and I think it’s very dangerous, and I think Chuck Schumer and I are in alignment about Israel’s stance in geopolitical politics—I think it’s of the utmost importance—and I think she is bringing her party to the extreme…to the extremism on this,” McCain said, adding, “I stand by every single thing I’ve said, and if that makes me unpopular in this room or in front of you, so be it.”

“Well, I don’t… See, that’s a weird thing, that you can take the position of trying to be ‘unpopular.’ Here I am trying to find the common ground on this,” Meyers said.

“Were you bothered by her language about 9/11?” McCain asked.

Meyers responded: “I thought it was taken out of context, and I think if you watched that whole speech…”

McCain interrupted: “Would you give President Trump the same leverage if he had said the same thing?”

Meyers said, “Well, I would say that Donald Trump is certainly in no position to criticize her language on 9/11 based on the things that he’s said about 9/11, right? Let me make the clarification between Donald Trump and Ilhan Omar, is one of them has apologized and said they’re gonna try to do better and they’re going to be educated by people who know about this—that’s what she said. And it’s an interesting thing when we have two Muslim women for the first time [in Congress], they do have a different perspective on things, and when we talk about ‘let’s try to meet in the middle on things,’ we have to listen to other people’s perspectives.”

For the record, despite those apologies, Omar continues to associate and identify with the most belligerent anti-Israel and anti-Semitic, Muslim organizations in America, and make appearances that promote an anti-Israel policy which borderline on Jew hatred.

Meyers inquired, touching on that point: “Is there a way for people to talk about differences in Israeli policy without getting framed as anti-Semitic language?”

“Yeah. I just think you can’t talk about Jews ‘hypnotizing’ the world, talking about ‘all about the Benjamins,’” McCain said.

“You do keep bringing up the two tweets that she’s apologizing for, and I think that’s a little unfair to her,” Meyers argued.

“Are you her publicist?” McCain challenged the host.

Meyers ended the segment saying, “No, I’m just someone who cares about the fact that there’s someone out there who is in a minority, who has had death threats against her, and I think that we should all use the same language. You’re asking her to be careful about her language and I’d ask everyone to be careful about theirs.”

And the NBC network just inched another bit into the anti-Zionist camp, an inching that’s bound to erupt in a catastrophic anti-Israel wave as the 2020 primary debates begin. These are not good times for civilized debate in America. 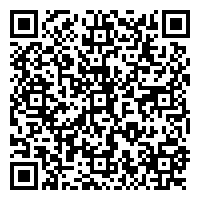