Last week my family and I experienced an aliyah first that I had prayed we would never have to face. Late Tuesday night, long after my kids had fallen asleep and my husband and I had settled down to our work, the shrill ear-piercing sound of air-raid sirens rang out through our peaceful city of Modi’in. Israel was under attack, and we were in the rockets’ paths.

From the time sirens sounded, we had 90 seconds to reach “safety.” The time seemed to be flying by too quickly as I rushed from my kitchen to grab my sleeping daughter from the other end of our 120-square meter apartment and carry her to our mamad (safe room).


Before my husband even managed to seal the door behind us, we could already hear the echoing booming sounds overhead. Were those rockets landing? Iron Dome interceptions? Huddled together in our safe room, we had no way of differentiating between the loud and scary sounds. Baruch Hashem, somehow our kids miraculously slept through it all.

While we were cleared to leave the mamad 10 minutes after the siren ended, we continued to sit there long after, trying to process what had just occurred. While for years we had read accounts of families in Sderot and other cities living under the terror of rocket fire, I had never really envisioned it as part of our Israel experience. Modi’in was supposed to be a safe city, far beyond the reach of Hamas rockets. Apparently that is no longer the case.

When we finally emerged from the mamad, I inevitably turned to Facebook to let friends and family know we were okay. Looking at my newsfeed, I couldn’t help but be struck by the dichotomy between Facebook posts from my friends back in the States and those here in Israel.

My American friends wrote posts full of Mother’s Day adventures, exciting Shavuot recipes, and excitement about the Mets winning streak. My Israeli friend’s posts were full of questions about how to better prepare their mamads, what to do if you’re caught outside during an air siren, and, of course, prayers for the return of safety.

As the week progressed and the rocket fire and air sirens continued, we all began sleeping in the mamad at night to avoid the mad dash to safety. As we sat in the mamad listening to the booms, we checked in with friends in the path of the same rocket trajectories and commiserated.

I’ve learned that compared to much of Israel, Modi’in really is safe. As a relatively young city, most apartments have their own mamad. Friends in older cities, like Ramat Gan, often don’t even have a miklat (bomb shelter) in their building and are forced to take cover in stairwells or hallways. We are also spoiled by the 90-second warning as our friends in the southern region of the country have only a 20-30 second warning.

Baruch Hashem, everywhere in Israel we are blessed with protection from above, both Heavenly and man-made. Baruch Hashem, my kids are resilient and, while my son has lots of questions about what’s happening, he seems more bothered by being stuck at home again than by the security situation. I may be jumping at every motorcycle or bus that loudly passes our window and am addictively refreshing the news, but we have been able to maintain some sort of normalcy at home as we continue to pray that this situation passes quickly.

To be honest, I almost didn’t write this article. I know our family back in the States and in Canada already worry about us enough without having to read about our experiences in a newspaper. But seeing how Israel is being portrayed in social media and the news, I feel like I have to do my small part to bring my homes closer together.

Let your friends and family in Israel know you are thinking of them and praying for them; you have no idea how much strength it gives us. When you see friends post incorrect information about the conflict on social media, contact them and correct them.

Call your congressional representatives and let them know that you stand with Israel. Remember, it’s their job to represent you, but they can’t do so if they don’t hear your voice.

Over the past week, I have been repeatedly asked whether I regret making aliyah. Despite my fear for my family’s safety and the stress of living under rocket fire, my answer is a firm no. This is my home, and through it all, this is where I belong.

May Hashem continue to keep us, our soldiers and all of Israel, safe and return peace to our home once more. 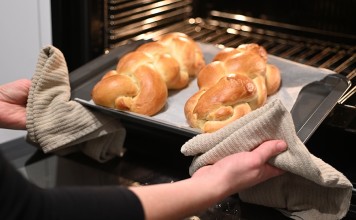