One thing is certain about Robert Feinland – he has shuls on his mind. His career has spanned over 40 years, exploring landscape, cityscape, sculpture and abstraction. For many of those years he has focused on the relentlessly changing urban landscape of New York, feeling the necessity to document and, in some way preserve, the physical fabric of the city he loves. A selection of recent paintings, most concentrating on the Crown Heights community, is currently at the Chassidic Art Institute. Many of the images are of shuls.

Brooklyn born, he was in a way typical of the 1960’s hippie generation until a chance encounter on the subway with a Chabad chasid changed his life. Seeing the way Feinland was dressed, the man simply said, “Hey man, you have to go talk to Rabbi Schneerson.” The man wouldn’t leave him alone until Feinland agreed. He went to Crown Heights and was very impressed with the totally unique world of Jewish religiosity. For a while he attended HaDar HaTorah, the newly founded Chabad yeshiva for baalei teshuva. While he never did speak to the Rebbe, he was, for quite a while, immersed in Jewish religious life. As the artist comments; “I did come in touch with my soul through my experience with 770 in the 1960’s.” Life has never been the same for him.

During the 1980’s Feinland began painting the Lower East Side, concentrating especially on the downtown synagogues. His technique, plein air painting (working outdoors in front of the scene, first favored by the early Impressionists), demands that he return over and over to the motif until he is satisfied with the painting. Perhaps out of the rigors of this discipline and the repeated confrontation with the physical presence of the scene, he has developed a unique approach to depicting urban landscapes. The curvilinear perspective he uses is at first unsettling, reminding the viewer of wide-angle (fisheye lens) photography. But of course his dedication to on-site observation is anything but unthinkingly photographic. Rather he is determined to fuse the optical effects of seeing a street scene up close with the attendant awareness of its inherent social importance. Incidentally, this technique was first discussed by Leonardo di Vinci, ca. 1500, and its multiple perspective points is paradoxically considered an approximation of how the human eye actually sees.

Synagogue For The Arts (2000) demonstrates the use of curvilinear perspective to visually situate a Jewish house of worship on an otherwise drab Soho street. When a visitor stands in front of the shul, one just sees it as an odd bulging structure sandwiched between 19th century cast iron facades. But of course in order to see the synagogue in context of its neighbors, one must scan the block horizontally and then up and down to get a sense of its physical presence. And that scanning of multiple points of view is exactly what Feinland is representing in his painting. By curving the street and its buildings he provides the experience of profoundly encountering this shul. The visual experience of the painting creates an approximation of confronting the incredibly anomalous and dramatic sculptural nature of the shul’s architecture. This is made even more dramatic since the painting depicts the shul in the late afternoon when it is in shadow, thereby emphasizing the mass of its form without the obviousness of morning sunlight.

Aside from this formal analysis, Feinland may be ironically commenting on how the shul actually came to be on White Street in Manhattan. Originally there was a synagogue for the civic center workers on Duane Street that was razed to make way for the Jacob Javits Federal Office Building. This shul was “imposed” upon the adjacent commercial properties as part of the eminent domain settlement. Thus the “distorted perspective” of urban planning and resulting need to address its consequences.

Feinland’s painting of the Millinery Center Synagogue (2005) is part of a similar social commentary. Here the narrative is one of valiant resistance. The forces of development, exemplified by the blurred rushing traffic in the foreground, confronted the brave little congregation of the Millinery Shul and, as is dramatically expressed in Feinland’s painting, it has become “the little shul that could” resisting the relentless real estate development of the late 1990’s. The leadership refused to sell its property in the face of a plan for the massive redevelopment for the entire block. It remains a synagogue there today. While it struggles, it continues to function providing multiple much needed Mincha and Mincha/Maariv services.

The image centers on two little buildings on Sixth Avenue just north of 38th Street, the Millinery Center Synagogue and its four-story neighbor to the right, surrounded by empty lots ready for development. A sidewalk bridge already threatens to the south and the empty northern lot’s diagonal crane reaches skyward pointing the way to the inevitable future. Pictorially, all of the towering forces in this urban environment are arrayed against this diminutive bastion of faith. 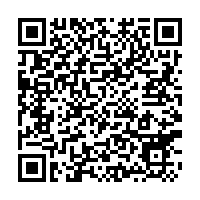