On December 17, 2020, for the first time in 20 years, Sotheby’s held two Judaica sales on the same day, which last occurred back in October 2000. One sale featured items from various sources, and the other focused exclusively on pieces belonging to the Sassoon family.

The Sassoons, a family of Iraqi Jewish descent, are known as the “Rothschilds of the East” due to the immense wealth they accumulated in finance and trade. Originally based in Baghdad, they later moved to Bombay, India, and then spread out to China, England, and other countries. It is said that the family descended from one of the court families of the Iberian Peninsula in the 12th century. They later served as financial advisors to Islamic rulers.


Here are the highlights of this historic sale: 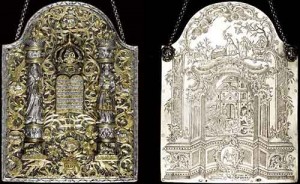 All anyone talked about before this sale were the two Torah shields offered, estimated at $600,000-$900,000 and $500,000-$800,000, respectively. The opulence of the workmanship of both makes them a sight to behold. The first features representations of Moshe and Aharon flanking a crowned luchos. Decorated in high-relief, gilded silver, there are baskets of flowers and fruit along with animals of all types surrounding Moshe and Aharon, including birds, a bear, sheep, ox, deer, leopard, and elephant. Incredibly, the reverse of the Torah shield is decorated as well, with lavish engraving featuring Akeidas Yitzchak, Yitzchak blessing Yaakov, and a levi washing the hands of a kohen (indicating that the original owner who commissioned this shield was a levi).

At the very bottom, it states in Hebrew “Made by my hand, Elimelech Tzoref from Stanislav, in the year 1782.” Stanislav was a small town with a very modest population, so it is unlikely if not impossible that this shield (and the other shield, also made by Tzoref), were created there. There are tax marks from Lvov impressed into the shield, which makes sense, as Lvov (also known as Lviv or Lemberg, located in present-day Ukraine), was a major center of 18th century Jewish life and culture. 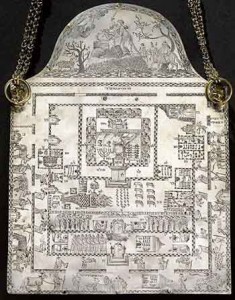 The second shield features many of the same animals depicted in the first shield, but lacks the Moshe and Aharon figures. The reverse side is lavishly engraved as well, this time with a breathtaking display of a plan of the Beis HaMikdash. In the center, of course, is the Aron Habrit, followed by the Temple Menorah, showbread table, and much more. The borders of the diagram depict a procession of people bringing animals to be sacrificed.

The first shield set a new record for the price of a Torah shield – it sold for $1,351,000, breaking the price achieved for another Sassoon Torah shield which appeared at auction back in October of 2000. That one sold for $800,000 and is now in the collection of the Israel Museum in Jerusalem. The second shield in this auction (which personally, I prefer over the first shield), sold for $685,000. It has since been made public that, once again, the Museum of Fine Arts in Boston has acquired a standout piece of Jewish ceremonial art from a Sotheby’s auction – this time the $1.35 million-plus Torah shield. At this rate, the MFA is on track to assembling the most impressive collection of antique Judaica for a general arts museum in the United States. 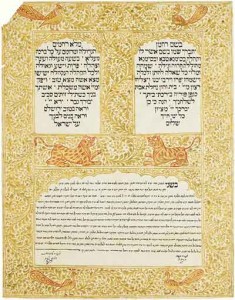 Another item that achieved an impressive result was a ketubah from Bombay dating from 1853. Featuring lions and peacocks done in shell gold, it achieved $63,000 against a $10,000-$20,000 estimate. Only 17th and 18th century ketubot from Italy realize sums like this; if it were not for the provenance and strong collector demand for anything Sassoon-related, it’s doubtful this ketubah would have reached such a healthy price; more likely it would have fetched a fraction of it.

If not for the attention-grabbing Torah shields, I think the star of this sale would have been the most magnificent Esther scroll case for Purim I have ever seen. Made entirely of gold, the body of the case is decorated with scenes such as Esther before Achashveyrosh, Haman leading Mordechai on the King’s horse and dressed in the King’s robes, and the hanging of Haman with a soldier and other figures in the background. This case, hailing from 18th century Italy, was given an estimate of $60,000-$90,000. It sold for $302,400.

As expected, the number of lots sold from this sale was extremely high, at 96%. Of note was a wedding robe for a groom from Bombay, which achieved a mind-boggling $50,400 against a $2,000-$4,000 estimate. And finally, a miniature Torah scroll (the parchment measuring only 2.75” high!), which was accompanied by fitted miniature silver Torah finials, shield, and pointer – everything a regular-sized Torah scroll would have. Such small scrolls were for personal use, and were commissioned in 18th and 19th century Europe only for the extremely wealthy or to present to a Grand Rebbe. Based on the styling and workmanship of the decorative elements, it is thought that this grouping originated from the Netherlands, circa 1850. Given an estimate of $80,000-$120,000, it sold for $252,000.

As previously mentioned, there was another Judaica sale held at Sotheby’s on the same day as the Sassoon sale, comprised of material from anonymous consignors. Among the ceremonial objects offered were the typical array of pieces, mostly in silver, hailing from across Europe. What most surprised me was the number of Judaica objects offered that were not antique at all, but made in the last 30 or 40 years, both in the United States and Israel. This addresses the relatively recent trend of a new batch of collectors who have little or no interest in antiques, but prefer items made by contemporary artists that have a modern look and feel. All of these wares sold, including a very sleek silver etrog box made in 1985 by Arie Ofir, which went for $7,560. Also of note was a very early pair of Torah finials from Rotterdam, which was hallmarked with a date of 1649. Given an estimate of $80,000-$120,000, the pair sold for $176,400. 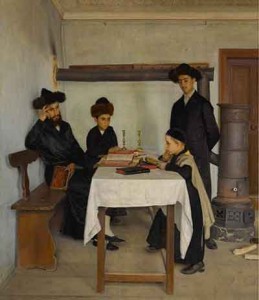 The final lot worth mentioning is something I somewhat regret not making an appointment to view in person due to the current pandemic: a stunning painting by the legendary artist Isidor Kaufmann (1853-1921). I always enjoy getting up close to a Kaufmann painting because the depth of detail in his works are so realistic and lifelike. Kaufmann was known for his portraits of religious Jews. The painting offered at Sotheby’s, entitled Sabbath Morning, is a rare example of Kaufmann’s work because it depicts more than one figure; here, four – a father with his three sons, religious books in hand, seated on a bare wooden bench next to a wooden table, which displays a pair of brass candlesticks at the far end. Estimated at $200,000-$300,000, the painting sold for $409,500.

Jewish Press readers: Do you have an old Jewish object you want to know more about, such as a menorah or spice box? E-mail me a photo and I’ll tell you all about its history (and current market value), in a future column of Antique Judaica Roadshow! Send your photo to tsadik613@gmail.com. 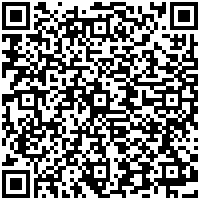