I have this vase that has been in my family a long time. It is a six-sided vase from pre-1948 Israel and is stamped “Bezalel.” Let me know if you need any more information.

What you have is a beautiful brass piece made by the Bezalel School of Arts & Crafts. Established in 1906 in Jerusalem, this school, under the leadership of its founder, Boris Schatz (former court sculptor to the king of Bulgaria), set out to create functional, decorative, and ritual handicrafts in a unique style that blended classicism, art nouveau, and Middle Eastern elements (in which Biblical and Zionist themes were often portrayed).

Your vase was made circa 1920 at Bezalel and decorated using a technique called acid-etching. The vase features men on camels, horses, and donkeys, menorot, Stars of David, and Hebrew verses related to “redeeming the Land,” including “If I forget thee, O Jerusalem, let my right hand forget her cunning (Tehillim 137:5).

I see that the vase has a dark brown patina. Do not be afraid to polish the vase for fear of damaging it or decreasing the value – just use a soft cloth or paper towel along with a non-abrasive metal cream; the product Noxon is excellent.

Prices of Bezalel vases like yours have varied over the last decade, from highs of $1,800 to lows of $700. Based on the multiple photos you have provided of all six sides, including that of the hallmark, your vase has a value of $800-$1,000 in today’s market.

One reason for these fluctuating values is that the marketplace is flooded with Bezalel fakes; novice collectors become upset when they discover that they have been duped and, as a result, stop buying. (No worries with your vase – it is a lovely original.)

Due to financial struggles, the Bezalel School closed in 1929. Boris Schatz passed away in 1932. The school re-opened in 1935 under the name “The New Bezalel.” This school still exists today, and is known as the Bezalel Academy of Arts and Design. 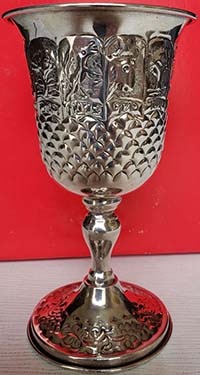 I bought this kiddush cup at an antiques show. It is six inches high, and the mouth of the cup is three inches. It has a stamp of “800.” It has each of the tribes of Israel around the outside of the cup and the word “Yisrael” engraved on the base of the cup.

The yahrzeit lamp holder is made of a brass-type metal with the wording of “Yisgadel V’yisgadash.” I was told it comes from the Prague area. I hope you will be able to shed some light on the value of these two items. Thank you in advance.

Your kiddush cup was made in Israel during the 1960s or early ’70s. The designs of the symbols for the 12 tribes were heavily influenced by what was going on in both Israeli art in the 1960s and how Judaica items were decorated during this period in America by artisans such as Ludwig Wolpert. 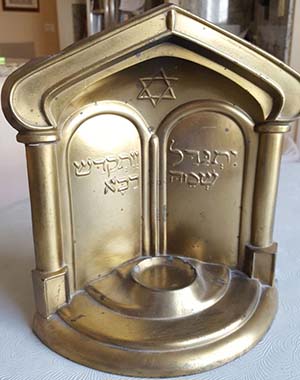 From the stylized Hebrew lettering to the bold depictions of the symbols, this cup has a very “’60s look.” If you have ever been in a Reform or Conservative synagogue built during the 1960s in America, you would see Hebrew lettering and animals decorating stained glass windows, Torah ornaments and curtains, etc. featured in quite a similar fashion to how your cup is decorated.

There has been relatively new interest in Judaica from that era, so demand is currently on the rise for a cup like yours. In today’s market, the value would be $300-$500. This is one of those pieces that might do surprisingly well at auction.

As for your yahrzeit lamp holder, it is most certainly not from Prague, or Europe at all. It is American, and dates to the 1930s or 40s. It is made of base metal that has been painted a golden color. Even though it is quite attractive in design, with the Hebrew letters having the vowels depicted, the monetary amount is modest due to lack of collector interest. Value: $25-$50.

I saw in a recent Jewish Press column a menorah similar to the one my grandfather had. Mine is a little different and I wanted to know if the same information you gave the other reader applies – that it’s from the 1920s or 1940s. There is also a besamim holder which says “silver.” Can you please let me know? Thank you.

Yes, indeed, your chanukiah belongs to the same group of chanukiyot that a reader asked about in one of my previous columns. Like that piece, yours was made in New York during the 1940s. Unfortunately, I have to assign a lower value to your chanukiah as it is not as decorative as the other one; in particular, there is no depiction of the Temple menorah in the center. Instead, there is a blank cartouche, possibly for the owner to have his name professionally engraved in. Value: $600-$800.

Your spice tower is very interesting. I do not recall seeing an example like this before; all the pennant flags display a slightly stylized depiction of the Temple menorah from the Arch of Titus in Rome. Based on the quality of the filigree decoration, the pennant flag decoration influenced by the Art Deco movement, and the hallmark, it appears that this was made in New York during the 1930s. The Temple Menorah pennant flags and the large filigree Stars of David decorations are likely an allusion to Zionism. Value: $300-$500.

This beautiful brooch belonged to my mother, a”h. I don’t know when or where she got it. Engraved on the back at the bottom is says “Made in Israel St. 925,” then “Yerushalayim” in Hebrew. I tried to take a picture of it, but I couldn’t zoom in close enough. I did some research online and this piece seems to be part of a series called Bezalel Filigree Silver. I was wondering if you could provide me with any more history. Thank you. 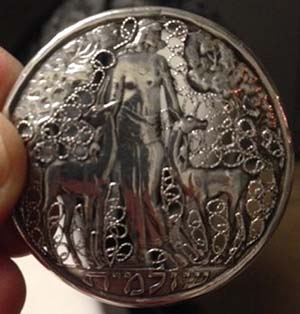 Your brooch was designed by the most famous artistan that the Bezalel School in Jerusalem produced: Ze’ev Raban. Raban loved to create depictions of Jewish women from the Torah in paintings and on jewelry; these women were shown wearing flowing dresses and elaborate headpieces. A whole series of these silver filigree brooches was originally made in 1930s, each featuring a different Jewish woman, such as Rachel, Esther, Devorah, Yehudit, etc. Those pins were hallmarked “Made in Palestine,” “Yerushalayim,” and sometimes the Hebrew word “Bezalel.”

Your brooch is marked “Made in Israel,” which indicates a post-1948 date of manufacture, as these brooch pins were constantly being produced through the mid-1950s. Unfortunately, over the last 5-10 years, prices for these have been steadily declining since, due to the Internet, what once were thought to be hard-to-find brooches are not, indeed, hard to find. They were apparently made in tremendous numbers since they are constantly appearing for sale in Internet auction forums.

While you have a brooch produced in a later era, it is one of the more difficult-to-find brooches, as it features Shulamit as opposed to the more often seen Rachel or Devorah. Not too long ago, your brooch would have sold for $250-$300. However, today it would only sell for $100-$125. 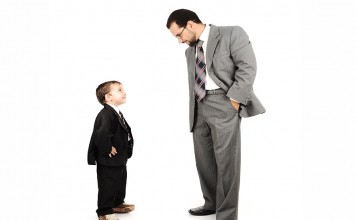 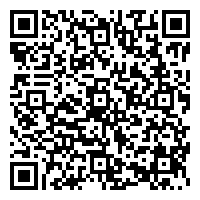