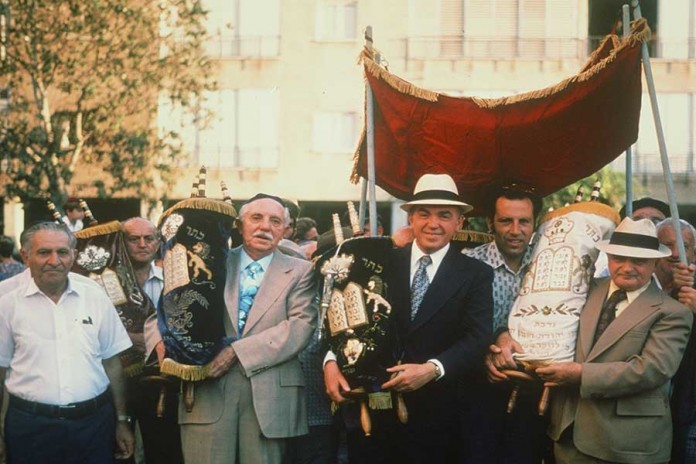 Over the past century, hundreds of synagogues in Brooklyn have come and gone as Jewish populations migrated to newer neighborhoods built in the borough and enclaves in New Jersey and the Five Towns in Nassau County, New York, during the 1960s and 1970s. One such synagogue, Congregation Ahavas Achim, was a thriving congregation for more than half a century in Brooklyn’s East Flatbush neighborhood – until it wasn’t.

When the board of directors of the Orthodox synagogue decided to call it a day around 1976 and fold up its tent at 203 East 37 Street between Church Avenue and Linden Boulevard, the board members were perplexed about what to do with the assets from the sale of the building, which included $100,000 ($454,250 in today’s dollars) 10 Torahs, ornate silver crowns, and silver Torah breastplates as well as two large memorial tablets with several hundred plaques.

The synagogue building now houses a church. The building has typical Romanesque Revival-style windows and doors topped by half-rose windows. It is also built in the triptych open Torah style. Many examples of Judaica are still retained on the front of the building, including the name of the synagogue written in Hebrew, as Cong. Ahavas Achim of Flatbush. The front gate still has prominent Jewish stars. The congregation originated in 1923, according to the book The Lost Synagogues of Brooklyn.

“The shul was a welcoming environment led by its long-time spiritual leader, Rabbi Sholom Zvi Barenholtz, and his rebbetzin,” recalled Mel Ness, a resident of Teaneck, New Jersey, and currently a senior vice president of Touro University. “The rabbi had a very warm personality and was a talmid chacham of note delivering drashas in Yiddish and English. He was also an excellent ba’al tefila and led services on the Yomim Noraim (High Holidays).

“The shul, with its 300-seat sanctuary and upstairs balcony for women, Beis Midrash and social hall, was the center of the East Flatbush community welcoming both religious and non-religious young post-war families and survivors. Many mourners, who were not shul attendees, came to say kaddish and were drawn to the rabbi and the shul, only to become members of the congregation. Ahavas Achim was also very welcoming to youth through its dynamic Talmud Torah and junior congregation,” concluded Ness, who had all his early significant Jewish life experiences at Ahavas Achim.

Two of the board members from Ahavas Achim moved to the relatively affluent Brooklyn neighborhood of Mill Basin and became members of Flatbush Park Jewish Center (FPJC).

Enter Rabbi David Halpern, the spiritual leader of FPJC. The members from Ahavas Achim brought with them the ten Torah scrolls and the other accoutrements to be stored in a safe place at the Mill Basin house of worship. Rabbi Halpern then had an idea that successfully came to fruition. He heard in 1977 about a struggling congregation that was housed in a school building in Israel and was embarking on building a brick-and-mortar structure in Shikun Bavli, an area in northern Tel Aviv, near Hayarkon Park.

The deal Rabbi Halpern and two board members, Vice President Ben Schneider and Treasurer Naftali Krauthamer, struck with the leadership of the fledgling synagogue in Tel Aviv was inspirational as well as being a mitzvah on many levels. The congregation in Israel needed funds to complete its building.

Rabbi Halpern and the officers offered to give the new synagogue the $100,000 dollars from the sale of the building, and eight of the ten Torah scrolls with all the silver crowns and the memorial plaques. In exchange, the Brooklyn synagogue wanted two concessions. First, that the synagogue in Israel would bear the name of Ahavas Achim. Second, all the memorial tablets of Ahavas Achim were to be mounted on the walls of the new sanctuary and the yahrzeits observed. The deal was sealed and announced in the September 1978 issue of The Voice, the FPJC synagogue bulletin. A portion of $100,000 went for installation of an air raid shelter at the base of the house of worship as required by law in Israel.

“A synagogue that could have sunk into oblivion was perpetuated in the Holy Land,” Rabbi Halpern proclaimed. “We are about to emplane to share the final step in a process that began more than two years ago in East Flatbush. The men and women of Congregation Ahavas Achim are to be admired. They discharged a trust with great honor and served as a beautiful example to other congregations in similar straits.”

In August 1978, a farewell ceremony was held at FPJC and at John F. Kennedy International Airport in Queens. In Israel there was a glorious welcoming ceremony at the new synagogue located at HaKnesset HaG’dola Street 7, Tel Aviv-Yafo. Rabbi Halpern and Rabbi Isser Frenkel, the rav of the shul in the new building (and the brother-in-law of the former Ashkanazi Chief Rabbi of Israel, Rabbi Yisrael Meir Lau), spoke. Rabbi Barenholtz, the former Rabbi from Ahavas Achim of East Flatbush, also participated.

From one person’s perspective, Adam Gough noted the synagogue is thriving after more than four decades of existence.

“Our shul, Ahavas Achim – Bavli, is a very vibrant organization. We have a wonderful rav, Rabbi Yisrael Shapiro,” said Gough, a long-time shul member and volunteer. “Our shul has multiple daily and Shabbat minyanim, a weekly Shabbat kiddush, daily Daf Yomi as well as regularly scheduled lectures and social events. In the last decade, many young couples have joined the shul and have helped revive it. The shul has a children’s tefilla and a biweekly learning program with parents and children. In memory of our long-time founding rabbi, we have an annual Azcara for Rabbi (Isser) Frenkel (1933 – 2010) joined by members of his family. I have been a member for many years, but I am so happy to learn about Ahavas Achim of East Flatbush and the original story of our shul, and our Sifrei Torah and memorial plaques. We also have a beautiful plaque commemorating the precious gifts from Ahavas Achim of East Flatbush.”

Only eight of the ten Torah scrolls went to Ahavat Achim – Bavli. A ninth Torah scroll was presented to a hospital sanctuary in Islip, New York, and a tenth Torah scroll was presented to Beit Choron, which was established as a kibbutz on December 1, 1977. Beit Choron is located in the West Bank in Judea between Modi’in and Jerusalem. It is a 20-minute drive to Tel Aviv, and 15 minutes to Jerusalem. The biblical pass of Beit Choron (Joshua 10:10), after which it is named, falls under the jurisdiction of Mateh Binyamin Regional Council. In 2019 it had a population of 1,437. A religious elementary school located in Beit Choron serves local children as well as those from surrounding villages. There are also three nurseries and kindergarten, two synagogues, a kollel, a mikvah for women and men as well as a library.

The heart-wrenching story of a fallen synagogue gaining a second chance at fulfilling Yiddishkeit was especially meaningful to Rabbi Halpern.

“My father looked at the collapsing synagogues of Brooklyn with great sadness,” recalled Teaneck, New Jersey, resident, Dr. Neil Halpern, son of Rabbi Halpern. “He was thrilled to meaningfully participate in the rebirth of Ahavas Achim of East Flatbush as Ahavat Achim – Bavli in Tel Aviv and to present a Torah to Beit Choron which had no Torah at the time. To this day, my mother fondly recalls visiting the shul in Tel Aviv and with Rabbi Frenkel several times in the years that followed and the extraordinary celebration at the kibbutz.”

Rabbi David Halpern, the spiritual leader of FPJC for more than 60 years, was niftar on Shabbos, 27 Tishrei, 5777, October 29, 2016, four days after Simchat Torah. He was 88 years old. At the time of his passing, six years ago, he left behind his wife, Sheila; a sister, Hannah Edelman; three children, Neil (Judith), Risa (Dennis Weinstein) and Beth (Jimmy Sitt) as well as many grandchildren and great-grandchildren. May his memory be for a blessing.