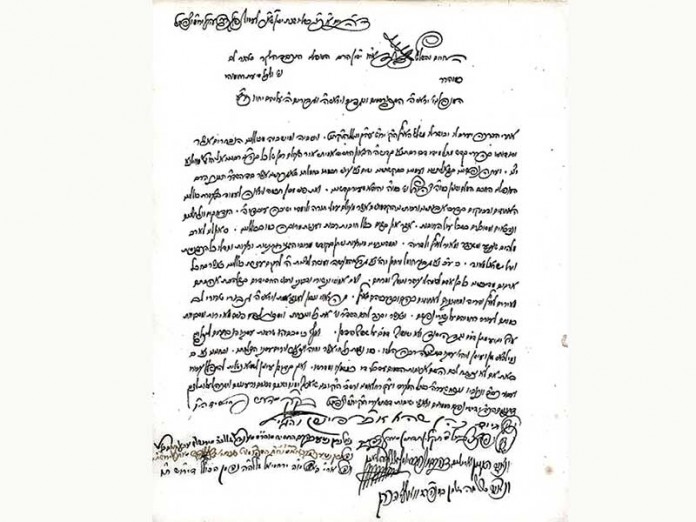 An exciting find I found this week tells of one individual’s response to the Nazis’ attempt to shame and isolate the Jews by forcing them to wear the Jewish star on their clothing.

The book’s theme is the Jewish star, the Magen David, and it features prominently on the cover and title page of the book. This copy, printed in 1900, bears a lengthy two-page inscription on the free-end, dated Prague, 1941, during the era when the Nazis had already assumed control of the region but the Jews have yet to be rounded up and sent to the camps. Forced to wear the Jewish star on their clothing when out in public, the writer of the inscription writes in defiance of the Nazis, describing how he wears the star with pride, and how proud he is to identify as a Jew.

A loose translation from some of the German inscription: 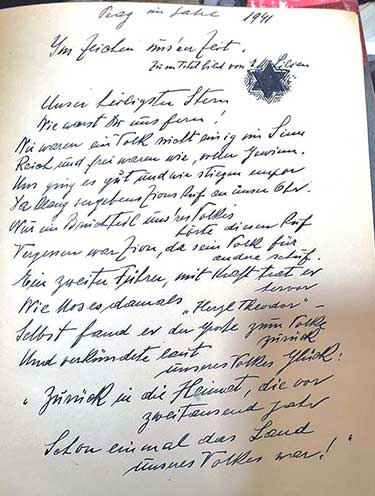 “Our holiest star never were you far from us! …
Zion called out to us, without our response
Only a small part of our people heeded the call.
Forgotten was Zion for his people was occupied with other matters…
Like Moses back in the day rose “Herzl Theodor”…
And loudly proclaimed to our people…
“Back to the homeland which two thousand years ago
Was the land of our people!”

“Carry the star deep in your heart and with pride wear our star
Follow his call from near and from far!”
Widely Eretz Yisrael opens the gate to everyone,
but just a few of us find [their way] back to the homeland –
His people ignores this scream
It didn’t find the way, but alas it is too late now, bygone –
Millions of marked Jews [as by fate], carry it with joy
In times of need and in pain, the holy star is with them
And if again the call to Eretz awakes us
Then rise up Israel, which has so long crouched
In the middle of other peoples and foreign nations,
Creating culture and values, always suffering
“Back to the homeland, which has been two thousand years ago
Once before the land of our people”
There Israel your heart and your sense will become healthy again
There your effort and effectiveness brings you freedom and everlasting gain! 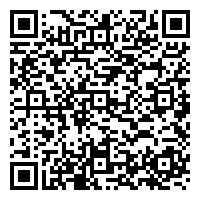