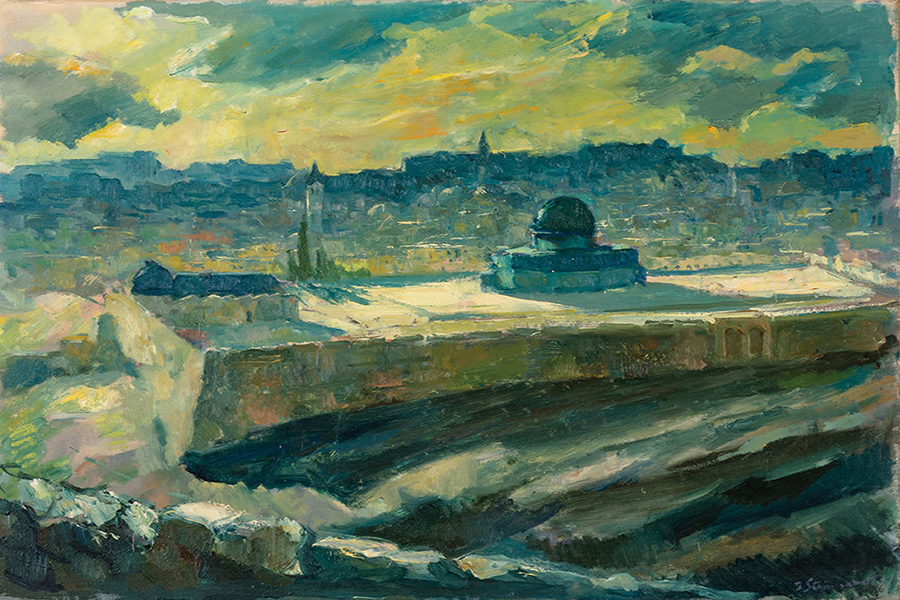 In recent months, three auction houses devoted to offering solely Jewish-related antiques and collectibles, held sales featuring books, manuscripts, and objects from all around the world. Here are some highlights:

Kestenbaum & Company, located in Manhattan and best known for offering seforim and letters signed by great rabbeim, had three lots in their November sale that stood out to me as quite interesting. The first was a letter from Albert Einstein dated March 1, 1935 (two years after he fled Nazi Germany for the U.S.), in which he addressed his concern that Americans were not sufficiently aware of the fervor of Germany’s aggressive views and attitudes. Einstein notes in the letter that he possesses a quantity of back issues of the vehemently anti-Semitic German weekly newspaper Der Stürmer, and states: “It would be very beneficial if my collection could be used to inform local non-Jewish circles about the true nature of Hitler’s regime. In my opinion, there is not enough happening here in that direction.” Given an estimate of $3,000-$5,000, the letter sold for $5,000.

Another lot featured 65 issues of the newspaper Jüdisches Nachrichtenblatt (Jewish News Gazette), the Vienna edition, all from the year 1940. Following the Kristallnacht pogroms of November 1938, Jewish life in Germany and Austria was further curtailed, and all remaining Jewish newspapers were shut down by the Nazi government. In their place, the Nazis ordered the creation of a single, new Jewish newspaper that would be directly under Gestapo control. It was published concurrently in Berlin, Vienna, and Prague and was occupied to a large extent with promoting emigration and announcing the ever-increasing number of anti-Semitic measures, orders, and exclusions imposed by the Reich government. Given an estimate of $4,000-$6,000, this grouping sold for $6,825. 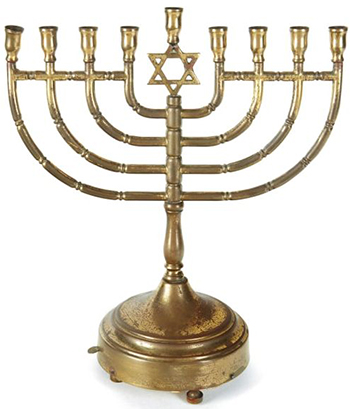 Finally, the lot that sold for the highest price of the sale (and garnered attention across the country), was a Chanukah menorah given to the actress Marilyn Monroe in 1956 by the parents of her new husband, the playwright Arthur Miller. This brass menorah holds a music box in the base that plays “Hatikvah.” This very menorah previously sold for $19,550 during the “The Personal Property of Marilyn Monroe” sale at Christie’s auction house in 1999. Given a healthy estimate of $100,000-$150,000 by Kestenbaum, the menorah sold for $112,522. Rumor has it that it was not purchased by a collector of Judaica, rather by a collector of anything Marilyn Monroe-related. I recognized the Chanukah menorah instantly, as I have seen numerous examples over the years in flea markets, and if the music box is in working condition, one could be purchased for a mere $25 to $50. It is absolutely mind-boggling what provenance can sometimes add to the monetary value of an item! 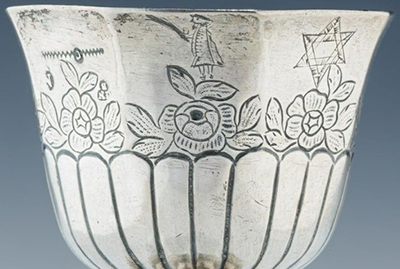 J. Greenstein & Co., located in Long Island and best known for offering ritual objects from every era and place of origin, had a number of lots in their December sale that caught my eye. One was a late 18th-century silver goblet from Nuremberg used specifically for Succot. With Hebrew engraving contemporary with the age of the cup, it states “You shell dwell in booths seven days,” along with a Star of David and a man holding a lulav and dressed in the latest fashion of the day: a skirted coat. Estimated at $12,500-$15,000, this piece sold for $9,375. Although German goblets from Nuremberg and Augsburg with period-engraved Hebrew verses appear in the marketplace with some regularity, they generally are for Shabbos, and less frequently for holidays such as Pesach and Succot. The “folk-art” touch of the man holding a lulav adds significant charm to this goblet, and it is surprising to me that it sold for under the estimate. 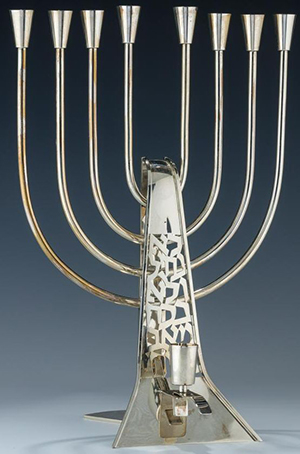 Another item offered was a highly stylized silver Chanukah menorah made by the Israeli artist David Gumbel in 1970. Born in Germany in 1906, Gumbel studied to be a silversmith at the School for Applied Arts in Berlin, and when he began working, he made silver objects designed in a very modern style, greatly influenced by the teachings of the Bauhaus school. Gumbel fled Germany in 1936 for Israel, and became a teacher at the famed Bezalel School of Art in Jerusalem, and later on, opened his own workshop. In recent years, Jewish ceremonial art made by silversmiths that introduced “modernity” to Judaica have become more appreciated by both collectors and museums, so much so that in 2012-13, the Israel Museum produced a ground-breaking exhibit called “Forging Ahead,” which featured Judaica made by Gumbel and a colleague of his, Ludwig Wolpert. This Chanukah menorah, given an estimate of $7,000-$9,000, sold for $8,750.

Last, we come to the lot that sold for the most in this sale, a ketubah. Lavishly decorated, this hand-painted-on-vellum marriage contract was from Venice, Italy and dated 1736. Antique ketubot are highly collectible, especially examples dating to before 1800 with decorative motifs. This ketubah featured signs of the Hebrew zodiac as well as implements used in the Beit HaMikdash, such as the showbread table and menorah. Given an estimate of $50,000-$70,000, the ketubah sold for $62,500. 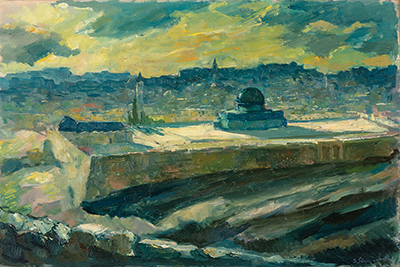 Kedem, located in Jerusalem, is best known for offering seforim, children’s books, and anything to do with the Land of Israel, both before and after the state was created in 1948. It should be noted that unlike American auction houses, most Israeli auction houses will not give estimates for lots, but state a “starting price” and let the marketplace decide what an item is worth by what it ultimately sells for. Kedem offered some interesting lots in their January sale, including a beautiful oil painting of the Temple Mount. Done in mellow hues of dark blue, green, and brown, this work by Jacob Steinhardt (1897-1968) depicts the Temple Mount and a panoramic view of Jerusalem. With a starting price of $5,000, the painting sold for $6,150. 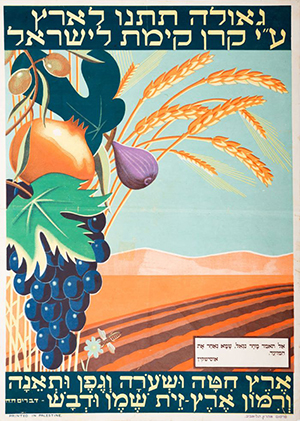 Another lot offered was a bright, vibrant poster issued by the Jewish National Fund. Done sometime in the 1930s or early 40s, the poster has close-ups of the “Seven Species” against a backdrop of a plowed field. At bottom is the Hebrew verse, “A land of wheat, and barley, and vines, and fig trees, and pomegranates; a land of olive oil and honey.” I do not recall seeing this poster before, even in museum catalogues, and apparently the audience agreed – as this poster had a starting price of $300 and sold for $6,150! 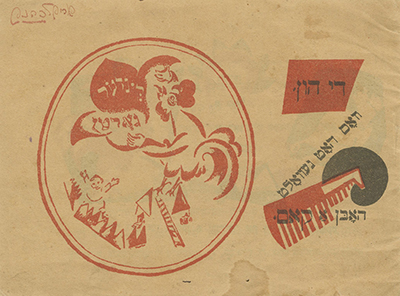 Finally we come to a children’s book illustrated by the famous Russian avant-garde artist El Lissitzky. Printed in Kiev in 1919, this book, written in Yiddish, is titled The Hen Who Wanted A Comb. Lissitzky did illustrations for secular as well as Jewish publications, and his works always perform strongly at auction, as there is a worldwide audience for any material designed by him. His most well-known Jewish work is the booklet Had Gadya, featuring 11 pages of illustrations of this Pesach song. The original 1919 printing only issued 75 copies; therefore extant examples are extremely desirable, so much so that when one appears in the marketplace, it sells for over $100,000. One of the 75 copies is in the permanent collection of the Museum of Modern Art on Fifth Avenue. Getting back to the The Hen Who Wanted A Comb, the lot had a starting price of $3,000 and sold for $13,530.

Jewish Press readers: Please e-mail me photos of your old Jewish objects to be appraised in an upcoming issue! Send them to tsadik613@gmail.com. 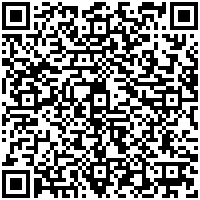