During the month of June in New York, two Judaica auctions were held; each offered ceremonial objects, paintings, and printed material that were of significant interest to collectors, dealers, and museums worldwide.


The reason these rimonim had such a healthy estimate and subsequent realized price is because the hallmarks on the finials indicated a date of manufacture of 1688 to 1689 by the silversmith Jurgen Richels. While 18th century Jewish ceremonial objects appear on the market with regularity, items (especially those made of silver) that are proven to be made during the 17th century and hail from Europe (excluding Italy), very rarely appear for sale.

I stress “proven,” because many times Jewish objects of any material often lack marks that indicate the year or decade it was made. Thus, even when a Jewish object has the styling, and manufacturing methods that conform to the 17th century, when said item is offered for sale, the description will read something like “Circa 1680.”

I had the opportunity to hold and examine these rimonim in person, and the quality was exceptional. They were made of extremely thick silver that was assembled by masterfully-cast sections joined together. It is now public knowledge that the Museum of Fine Arts, Boston purchased these finials. The MFA began collecting Judaica only during the past 10 years.

In 2009, a person the museum had never previously heard of, Mrs. Jetskalina H. Phillips, left $2.5 million in her will to the museum for the express purpose of purchasing Judaica. (Phillips was a retired schoolteacher in Kansas and converted to Judaism upon marrying her husband.)

Then, in 2013, the billionaire Lynn Schusterman from Oklahoma, bequeathed her entire Judaica collection of 119 objects to the museum, as well as an undisclosed amount of money so the MFA can conserve and study future Judaica acquisitions, as well as use the pieces to develop school programs. With the purchase of these rimonim, the MFA has shown how serious it has become in learning, studying, and ultimately deciding what kind of Judaica will be of interest to the public and cementing some of its Jewish holdings as truly noteworthy and “important.”

Aside from these, the MFA also purchased a pair of rimonim from London, dating to 1764, for $187,500 (against an estimate of $120,000-$180,000). The pieces had an impeccable provenance, having originally been part of the inventory of the Central Synagogue in London. The MFA has what is considered one of the strongest collections of English silver, and the finials it purchased fit in nicely, as it now are the first piece of British Judaica to be part of its assemblage.

Another item worthy of mention was a printed piece of paper from the 17th century. Spelling out the word “mizrach,” the paper was meant to be hung on the wall of a home or shul to indicate where Jerusalem would be. Until this mizrach plaque was discovered and offered for sale, the earliest known printed mizrach was one held in the Jewish Museum of Prague and dating to the second half of the 18th century. Given an estimate of $18,000-$24,000, it sold for $43,750.

Finally, a painting by the legendary Jewish portrait artist Isidor Kaufman (1853-1921), was offered. Titled “Rabbi with a Young Pupil,” it depicted a sensitive rendering of adult and child against a backdrop of a Torah ark curtain, each wearing garb typical of Eastern European Orthodox Jewry from the turn of the twentieth century, including fur shtreimels. Given an estimate of $300,000-$500,000, the painting sold for $375,000, which some would consider to be rather low for this work, given that there are two subjects depicted, which is most unusual for a Kaufman.

Moving on to another auction house, this one dealing exclusively with Jewish material: Kestenbaum & Company. One item of much interest was a silver Havdalah compendium (a candle holder and spice box combined in one piece, an object used exclusively by German Jews) that had an engraved presentation in Hebrew to Rabbi Samson Raphael Hirsch, stating “To my son the esteemed Rabbi Samson. From his mother Gella, wife of Rabbi Raphael. Purim, 1841.” The provenance of this item was of a direct line of descendants of Rav Hirsch to the auction house. Given an estimate of $20,000-$30,000, it was sold for $37,500.

Items that are known to have belonged to prominent, if not legendary, rabbis are very much sought after, mainly by well-to-do Orthodox or chassidic individuals who are not collectors of Judaica, per se, but would like to possess an item that was used by a famous rav/rebbe. A wonderful book, Great Jewish Treasures: A Collection of Precious Judaica Associated With Torah Leaders (ArtScroll, 2015), illustrates items like this that are in both public and private hands. Included in the book is the personal seal of Ramban (1194-1270), which was found in 1972 and subsequently acquired by the Israel Museum.

Without the engraving to Rav Hirsch featured on the Havdalah compendium, as well as the provenance, this item would be worth about $2,500.

Another piece that was offered was a magnificent Torah paroches from Bohemia (present-day Czech Republic), that was dated 1758. For those who had gone to the preview of the auction, this was a rare chance to get up close to a textile made by and for Jews over 250 years ago, utilizing materials such as gold and silver metallic thread and dyed silk. While the main part of the decoration of flanking lions and pillars are typical for paroches, what was truly a sight to behold were the detailed depictions of items described in the Torah as used in the Beis HaMikdash, such as the showbread table, altar, and menorah. Estimated at $12,000-$18,000, this curtain sold for $31,250.

The technique of sewing metallic thread is known by the Yiddish term Shpanyer Arbeit. Arbeit means work. Combined with the Yiddish term shpanyer, the term has been translated as both “spun work,” derived from the Yiddish word spinnen, and as “Spanish work,” work of a type produced in Spain.

The latter interpretation implying this method of metallic thread sewing was primarily, if not exclusively, practiced by Jews in 15th century Spain, and was spread to other parts of Europe after the expulsion of the Jews of Spain in 1492. Some scholars think this technique was originated by Jews decorating textiles in the Beis HaMikdash. 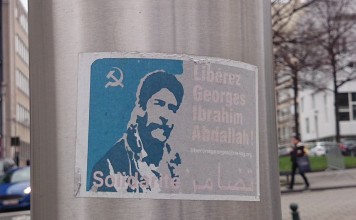 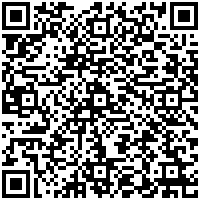