Hi. I very much enjoy reading your column in The Jewish Press. I’ve attached a picture of my great-grandmother’s Shabbat candelabra. I believe it was made in Poland some time in the 1800s. I would greatly appreciate any information you may have on it. Thanks. 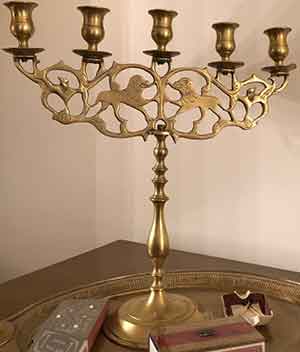 In early 20th century America, there was an industry based on the East Coast manufacturing Judaica for the teeming numbers of Jewish immigrants from Eastern Europe. The two most blatant examples of brass candelabrum that fit this category are a three-light example with a pair of lions enclosing a Star of David, and a five-light example with rampant deer enclosing a cast Hebrew inscription stating “To Kindle the Light of the Holy Sabbath.”

Today, when found, these candelabrums are frequently misidentified as originating from Poland by descendants of the original owners or by careless antique dealers. Your candelabra is the most common example of this “Jewish-American” type, and because there is no overt Jewish symbol or Hebrew wording like on the aforementioned examples, these were sometimes purchased by non-Jews as well. I have lost count of the number of examples of your candelabra that I have seen at flea markets, as these were made in enormous numbers, apparently for decades (likely beginning in the 1930s). So, to add to the disappointing news of your candelabra not being from Poland, the value is quite modest: $20-$30.

Hello. I wonder if you could tell me anything about this old Chanukah oil lamp. It’s heavy, and appears to be bronze. I appreciate your thoughts. Thanks. 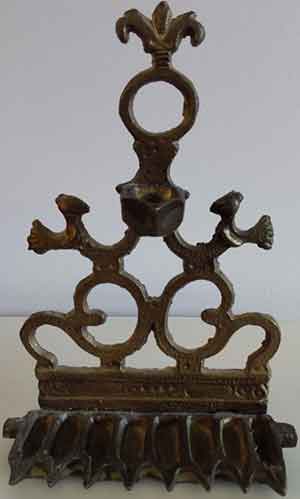 You have the exact type of Chanukah menorah that I most often see when doing public appraisal events of Judaica. It is a modern copy of a 19th century brass example originating in Morocco. Re-casts of this type have been made throughout the 20th century, and beginning in the 1950s, a tremendous “ramping up” of copies have flooded every antique shop, flea market, and bazaar in North Africa, Israel, France, and Italy. Your copy is rather poor in quality, as I can see the sharp edges of where the openwork decoration ends; these edges should have been filed down. So the care in making this, even as a “fake” to fool the naive tourist, was non-existent, which says to me it dates to after 1980 or so. Value: $10-$20.

Hi. This kiddush cup was among my late brother’s belongings. He lived in Los Angeles and used to go to estate sales and thrift shops. I don’t see any markings on it. It’s six inches tall and came in this very pretty maroon velvet box. I thought maybe it had been used in a synagogue as a ceremonial wine cup. Would you know anything about it? Thank you. 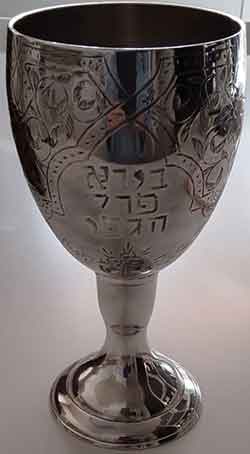 Your cup is part of a series of attractive, affordable Jewish objects made of chromed or plated metal that were offered in Judaica gift shops beginning in the late 1970s, and continue to be available this day. I have seen your exact kiddush cup in a velvet box (sometimes the box states “The Jacob Rosenthal Judaica Collection” on the inside) many times at flea markets and on Internet auctions, where it sells for between $20 and $30.

I have a Megillat Esther of unknown origin. Perhaps you can shed some light on it and its worth. The scroll is in bad shape and probably wouldn’t be considered kosher due to wear and tear. Thank you.

To the untrained eye, determining the age and origin of Esther scroll cases can often be frustrating, as even silver cases can be completely devoid of a maker’s mark or signature. Fortunately, however, I spotted a very small applied plaque by the handle that you may have missed. It states “Bezalel Jerusalem” in Hebrew. This “hallmark plaque” dates to the 1950s and is from Israel. You have a very attractive sterling silver case, decorated with hand-spun silver filigree wire. All cleaned and polished up, the value would be $800-$1,000. If the accompanying scroll were in decent shape, the value would increase to $1,000-$1,200.

Hi. I was wondering if you know how much this candle holder is worth. Thanks so much. 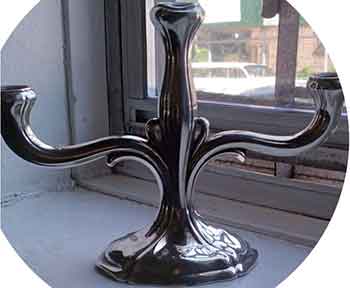 I do not appraise general antiques, only those made for Jewish ceremonial purposes. However, since you have stated to me in a follow-up e-mail that you use this candle holder to light Shabbos candles, I will make an exception.

The base of your piece has hallmarks indicating it was made in Germany shortly before the war – the 1920s or 30s. One of the hallmarks states “835,” denoting 83.5% silver, which is less than our modern standard of silver, 92.5%, better known as sterling. If your candle holder has no damage or repairs, the value is $200-$250.

Hope you are doing well. I am interested in determining the value of a print I received. It was given to me while helping a community member clean out her basement. She was the widow of a Holocaust survivor and she let me keep several of her husband’s seforim and old records. Before I walked out the door, she handed me this print. I am not sure of the origin, but I did manage to take photos of the number in the series as well as the artist’s signature (in Hebrew). Thank you very much for taking the time to look at the images. 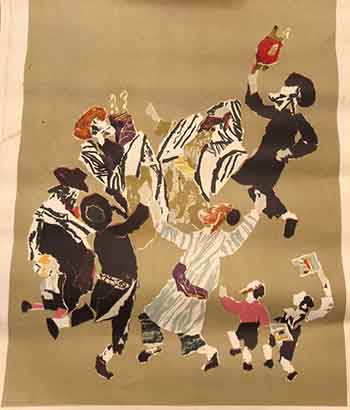 My expertise lies primarily in antique Jewish ceremonial objects (i.e., Judaica). When it comes to paintings and related works, my knowledge is limited to those made before 1940. However, it just so happens that I have been an admirer of the artist of your piece for many years, so I can answer your query.

Your print was taken from a collage made by the artist Yehudit Yellin (1923-2005), who is sometimes referred to as Judith Yellin, especially since her passing. She was born in Jerusalem and studied at the Bezalel School of Art as well as art schools in Paris and London. She came up with a technique of arranging small, hand-cut colored pieces of paper into scenes of Jewish life, such as a woman lighting the Sabbath candles, a wedding scene with a chuppah, and more, with one common feature in all of her works: No details are ever present in the faces – they are always blank, with no nose, eyes, or mouth.

Your serigraph depicts religious men and their young sons dancing during Simchas Torah, and this specific image is sometimes titled “Hassidic Dance.” Yellin signed this in pencil and it is numbered 67 out of 250 prints made, likely during the late 1970s or early 1980s. In perfect condition, the value is $150-$250.