Mincha is the most fragile of prayers. It is typically caught on the run, sandwiched between a hurried lunch and return to the ordeals of the workday. Even if prayed somewhat leisurely, after work in the late afternoon or early evening, it nonetheless must share the spotlight with the evening prayer that is ennobled by the awesome Shema. One might say mincha is the poor cousin of shacharis and the younger brother of maariv. It is in this context that Jaime Permuth’s photographs at the Yeshiva University Museum explore the textures and atmosphere of what is easily the least embellished prayer of the entire day, mincha.

This handsome exhibition, “Manhattan Mincha Map,” consists of 34 black and white photographs that survey the members of the minyanim and the exteriors of shuls, stores, and commercial lofts that serve as home to the fleeting minyans. Jews from all walks of life are seen, neat or shabby, in all shapes and sizes. All that this motley crowd shares at the moment the camera captures them is the desire to pray with a minyan. Each group of three or four images is a study in contrasts, interiors and exteriors that represent one location, one place of prayer.

While the exteriors are banal and possess only a fleeting documentary value, the interiors, populated with daveners are rich and fascinating. The magic of the camera that slices time allows us to see and ponder that which is ordinary and overly familiar. While some of the images amount to elegant portraits of individual Jews waiting to pray, praying or simply absorbed in private thought, the most fascinating photos are of the hodgepodge groups of minyans emphasizing the random nature of this prayer itself.

One cropped image is of six men, seen in the storeroom of Capital Electronics, three facing towards the camera, two facing right and one with his back to us. They pray in a room piled high with large boxes, one of which is used as a makeshift amud. Each man is dressed differently; a baseball cap contrasts with a battered fedora, while a suit and tie vie with a sweatshirt for sartorial splendor. It is exactly the apparent randomness that makes this image meaningful. The three men in the back reflect the three in the foreground imposing a compositional order that echoes the thin thread that connects them in communal prayer. After a quick shiur, they will pray the same prayer to the same G-d. Little else connects them. Exploring the nature of prayer that is fit into a limited amount of time and an even more limited space opens amazing possibilities for insight.

The “OU Minyan” depicts four men in a nondescript room, two standing in one direction and the other two in the background. Each man is absorbed in a deep interior dialogue. The two in the back frame the front two and pray without a siddur, totally engrossed and eyes closed in supplication. In the foreground, two closely follow the text searching the words for meaning and inspiration, with no less intensity. Their dress is more uniform; regulation jacket, tie and black hat, even as their recitation and pleading to G-d has swiveled them this way and that, making each person absolutely unique.

One of the subjects that surfaces from this series of photographs is the intensely individual nature of prayer, even when it is embedded in the mundane world. Beyond that, the wrenching concentration and radical shift of mindset becomes manifest. Due to the tedious necessity of making a living, these Jews pray in commercial establishments, factories, stores or storerooms, just within earshot of the everyday bustle. Their concentration and devotion is awesome and even heroic. Who can easily toss off the concerns of work and the distractions of business to stand and face one’s Maker? The 145th Psalm, “Ashrei,” exists as a meager barrier between the ordinary and divine communication. And yet, day after day, these men attempt to cross that divide.

The communication extends not only to the supernal realms but back into time as well. Amidst the clutter of stored merchandise, four men in overcoats have lined up for a quick tikun after davening at Adorn Glass. The impersonal glare of fluorescent lights flattens everything until one notices a picture of the Chofetz Chaim behind the men, perfectly aligned with their heads. The great sage has pictorially and spiritually joined the minyan. Here, as in most of the photographs, the skill of the photographer lies not only in his choice of subject, but how he composes the exact moment that captures the narrative of the prayer experience.

Even when the setting is in a proper synagogue the dynamics of momentary juxtaposition operate more forcefully at mincha than at other times. At shacharis, tallis and tefillin combine with the length of the service to settle everyone down. Not so at mincha where, whether standing during the Amidah or sitting for Tachanun, there is always the visual sense they will be out the door momentarily. The austere wood paneling of the Wall Street Synagogue is the background for the image of two men at right angles to one another. Each is seen behind a low partition, making it uncertain whether they are standing or sitting. The cropped arm in the foreground, draped over the railing, adds to the transient nature of the image.

Jaime Permuth has captured a whole range of subtle insights about the mincha prayer in this intensive series. The fleeting nature of mincha is compounded by the difficulties of switching from a secular mindset into a sacred mode and back into the secular world within less than 20 minutes. Additionally, the transformation from social engagement in the commercial world to an exclusionary personal communication with G-d, compounds the effort. Finally, in spite of the overwhelmingly personal nature of prayer, the very existence of a minyan depends entirely upon communal cooperation.

The image of two men davening as a third enters the doorway of Eagle Paper evidences exactly how much we need one another for communal prayer. The two praying are appropriately concentrating in contrast to the newcomer who is attempting to gauge exactly where they are in the davening. If it had just begun, he too will start to daven, if not, he may wait so as to be able to respond to kedushah or kaddish with the minyan that surely is standing just outside the camera’s view. In the most extreme scenario, it may be that he has just become the 10th man and, therefore, crucial to the entire enterprise. Whatever the case, this photograph, and much of the exhibition Manhattan Mincha Map by Jaime Permuth, elucidates the dependence one Jew has on another, all strangers and yet, all one family. For all of its fragility, humble mincha is frequently the glue that holds us together.

Richard McBee is a painter and writer on Jewish art. Please feel free to contact him with comments at www.richardmcbee.com.

INTO THE FRAY: Trump-Can Israel seize the moment?

That Awkward Moment when the MSNBC Anchor Tweets Something anti-Semitic 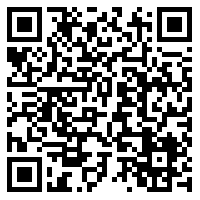