It’s getting to be that time of year.

The frosty chill in the air, early Shabbosos and the promise of Chanukah looming ahead, have us all channeling our inner Julia Child. Whether it’s hearty soups oozing with seasonal flavors or the scent of chocolate chip cookies wafting through your home, December was made for the kitchen – and thus the perfect season to check out some intriguing new cookbooks. 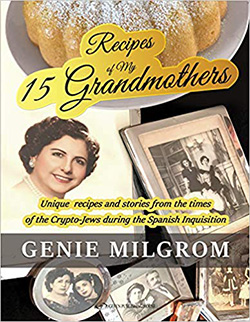 Genie Milgrom’s Recipes of My 15 Grandmothers, a Gefen publication, is equal parts history and cuisine. Milgrom grew up in a Roman Catholic household in Havana, but had always felt a connection to Judaism in her heart, officially converting in her thirties. Researching her family tree, she traced her matrilineal roots back 22 generations through Spain and Portugal to the year 1405, discovering that her family were Crypto-Jews who masqueraded outwardly as gentiles in order to survive the Spanish Inquisition.

Ironically, family traditions passed on by her mother’s mother were actually laws of kashrus. Milk and meat were never eaten together and eggs with blood spots were always discarded, while vegetables were inspected carefully to ensure that they were bug-free. It was while she was cleaning out her elderly mother’s home in Miami that Milgrom came across recipes that had been handed down through the generations, making their way from Western Europe to the Canary Islands, Cuba, Costa Rica and finally to Florida. From a historical perspective, the recipes were fascinating and as Milgrom translated them from Spanish to English she found herself facing instructions that called for “a small goblet of water” and “an eggful of oil.” It took time to adjust the recipes to their modern day equivalents and to make sure that all of them could be made kosher with commonly available ingredients. Recipes of my 15 Grandmothers contains more than 90 recipes and accompanying stories, taking readers on a culinary trip back in time that spans the globe.

Don’t be dissuaded by the lack of pictures – the recipes are clear and concise and spending a minute or two reading them is enough to get any creative cook heading for the kitchen. Because of the many unfamiliar names, the descriptions attached to each one are crucial, and it was also helpful to have every recipe identified by level of difficulty, milk/meat/pareve status and Pesach adaptability. There are some familiar recipes, like almond horns, chicken fricassee and vegetable soufflé, yet, the exotic ones really beckoned to me. Milgrom introduces the reader to cocido madrileno, a recipe dating back to the 1700s that was likely prepared as a Shabbos cholent, featuring skirt steak, meat bones, chicken, sausage, smoked turkey, potatoes, chick peas, whole eggs, tomatoes, carrots, Swiss chard, onions and garlic. Equally enticing is the Cuban boliche mechado, a beef roast stuffed with sausages and cured meats and simmered with vegetables in wine, tomato sauce and spices. Snapper in beer sauce is another must try, with Milgrom noting that while her Cuban ancestors may have prepared this dish with rum, it was likely made with wine in its earliest iterations in Spain. 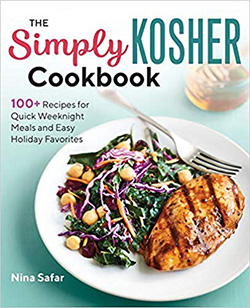 Fast forwarding to modern day cuisine, Nina Safar debuts with The Simply Kosher Cookbook, a Rockridge Press publication filled with recipes that are fast, easy and, of course, yummy. Safar is an old friend to readers of these pages since her fabulous recipes appear here regularly as well as on her blog Kosher in the Kitch. Safar, who grew up as one of eleven, came from a home where food brought everyone together and sit down meals gave the entire clan an opportunity to enjoy essential family time. While close bonds aren’t always a given in large families, Safar credits her mother’s emphasis on family dinners with forging the exceptionally close relationships that she and her siblings share and both Kosher in the Kitch and The Simply Kosher Cookbook are excellent vehicles for making those meals quick, painless and delicious.

There is much to love from the self-proclaimed “hungriest and laziest cook you will find.” 100+ recipes from baked kani bites with creamy dill sauce to skillet lasagna with mozzarella, mushrooms, onions and jarred marinara sauce that gets cooked from start to finish in a single pan, minimizing both the preparation and the cleanup time. Shakshuka with sausage is a great rendition of a dish that is currently having a well-deserved moment in the spotlight and works equally well as a hearty brunch or a light dinner, while falafel tacos are a creative spin on an Israeli staple, made even cooler for those who choose to stuff their spiced chick pea balls with cubes of cheese prior to frying. Safar dedicates an entire chapter of her book to cooking devices that work at opposite ends of the spectrum, but are equally great for working folk – slow cookers that can stew merrily all day long, and pressure cookers (an old favorite made popular again by the Instant Pot) which cook an entire meal at warp speed. And for those of you who, like me, have always looked longingly at Pop Tarts and wished that they were kosher, Safar’s vegan toaster pastries may just be the answer to your dreams. 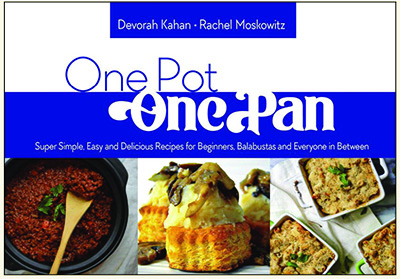 Never underestimate the imagination or the abilities of hungry seminary girls, who as I learned from my own daughter last year, can put together amazing food with minimal ingredients and the most basic cooking facilities. An Israel Bookshop publication, One Pot, One Pan is jointly written by Devorah Kahan and Rachel Moskowitz, friends who realized as they enjoyed a microwaved cookie in a mug during their gap year in Israel that so many teens had literally no idea how to cook even the most basic of foods. Putting their heads and skills together, they compiled a cookbook whose more than 50 recipes with full color photos are simple enough for kitchen newbies, tasty enough for seasoned veterans and can be made in just one pot or pan.

Keeping things simple doesn’t have to mean being sentenced to bland or boring food, a point that One Pot One Pan brings home with tantalizing veggie grilled cheese that can be cooked to perfection in that dorm essential, the humble sandwich maker, or even a frying pan. Adults who have no clue how to find their way around the kitchen will find themselves turning out all-star meals with recipes for onion soup, roasted cauliflower, crispy schnitzel, six ingredient shawarma that is ready to devour in just thirty minutes, and deceptively easy but equally impressive potato bourekas with mushroom sauce. My favorites here were the frozen banana chunks enveloped in a chocolate peanut butter coating and, ironically, something that wasn’t even a recipe – a conversion chart on page eleven displaying a pictorial correlation between frequently used kitchen measurements so that you will never again find yourself wondering exactly how many tablespoons there are in a quarter of a cup or how many cups make up a gallon.

Grab your favorite sweatshirt, curl up on your favorite spot on the couch and enjoy these latest cookbooks to hit the kosher food scene because there is no time like the present to make kitchen magic, with new and old recipes that everyone at your table will love.

My neighbor, James, is a talented cook. He cooks gourmet meals from scratch without breaking a sweat. Since I like to take it easy in the kitchen, I asked him to share one of his favorite Instant Pot recipes – but make it super simple. His mom, Diane, raised him on traditional Middle Eastern foods, and this recipe features a simplified version of a traditional Persian dish called beef khoresh. It is a savory stew of meat and beans cooked in a mix of tomato sauce, tomato paste, and spices – a really delicious and filling meal when served over a plate of rice. 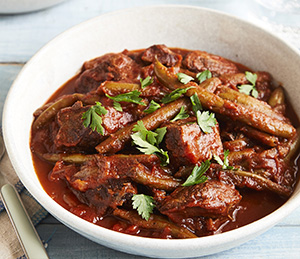 Meat Lasagna
from One Pot, One Pan

There’s nothing quite like melted cheese on lasagna, but this meat lasagna tastes almost as good. 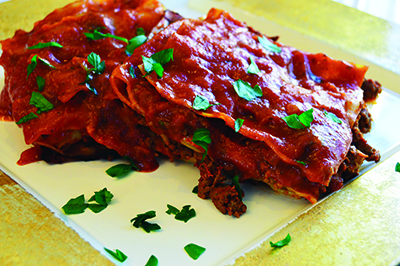 Heat oil in a frying pan over medium flame. Add garlic and sauté for 1-2 minutes, then add meat and sauté until fully cooked, stirring constantly to break into small pieces.

Pour one jar marinara sauce and all spices over the meat and stir. Remove from fire.

Cover the bottom of a 9×13 pan with a thin layer of marinara sauce.

Place a layer of 3 noodles over the sauce. Add another layer of sauce.

Spread a layer of meat over the sauce. Arrange another layer of lasagna noodles on top of the meat.

Repeat until you have 3 layers of meat. Add 1 more layer of noodles and top with sauce.

Cover and bake for 1 hour.

Tip: If you don’t need to use it right away, it’s usually less expensive to buy your meat frozen. To defrost, either transfer to the fridge about 24 hours before you plan to cook it, or place the package in a bowl of cold water for 30-40 minutes. Try to avoid using the microwave for defrosting meat.

Dulces en Almibar
from Recipes of My 15 Grandmothers 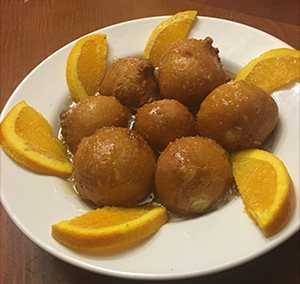 Directions:
Mix the eggs, sugar, butter, baking powder and some of the flour until you can just form a small ball. Add the milk and then add more flour little by little until you can form a paste. The mixture should be as soft as possible. Drop by tablespoons into a deep fryer of oil, and after draining, put in a dish and pour the syrup over them. Yet another Spanish delicacy!

Mix all together over medium high heat, stirring constantly until a heavy syrup is formed.